This past Tuesday, February 14th, the Board of Supervisors did an about face and reversed its decision on the Monterey-Salinas Transit (MST) / Whispering Oaks Business Park. LandWatch is thrilled with the outcome. Not only did the Board rescind its decision to re-zone the site, but it also rescinded its approval of the environmental document.

After an approval by the Board in July 2011 to overturn the Planning Commission's unanimous denial of the project, LandWatch took the necessary step to file a lawsuit on the project's environmental documents and support the Fort Ord Rec Users with their successful referendum petition on the site re-zoning. Faced with a successful referendum and a lawsuit, the Board had two options: rescind its original decision or allow voters to decide the project's fate.

A big "thank you" to the numerous volunteers and community leaders who made this effort a success. Now, thousands of oak trees and miles of trails in the former Fort Ord are spared.
Sincerely, Amy White, Executive Director
Posted by Rex Frankel at 7:24 AM No comments:

After litigation by the Center for Biological Diversity and allies, a superior court judge has struck down plans for a large housing development -- including 41 acres of houses and condos -- to be built in the Frazier Mountain area of southern Kern County, Calif. This sensitive, rugged mountainous area is home to highly endangered California condors and other sensitive species, including North America's fastest land animal, the pronghorn. The plan was for an area west of Tejon Ranch's massive Tejon Mountain Village -- another, even more massive project, which threatens a wide array of wildlife. The Center has been fighting Tejon Ranch development for years.


2/13/2012--BAKERSFIELD, Calif.— Plans for a large scale housing development proposed in the Frazier Mountain area of southern Kern County, Calif. were struck down by a superior court judge on Friday, Feb. 10, in a victory for groups fighting for smart growth in the region. The Frazier Park Estates project would have included 41 acres of houses and condominiums on steep and rugged terrain in the rural mountain area near Lebec and the Tejon Pass area of Interstate 5.

Judge Kenneth C. Twisselman of the Kern County Superior Court agreed with TriCounty Watchdogs and the Center for Biological Diversity that Kern County had failed to adequately analyze the project’s water supply; that the project description inconsistently described the project as having anywhere from 188 to 661 residences; and that the county improperly justified deferred mitigation for the project’s impacts. The suit was brought under the California Environmental Quality Act, or CEQA.

“This was the wrong project in the wrong location and never should have been approved by the county,” said Jan de Leeuw, spokesperson of TriCounty Watchdogs, a local environmental and smart-growth organization. “It threatened our very limited groundwater supply and would have radically changed the rural character of the region.”

Twisselman’s ruling voided the environmental impact report prepared by Kern County and will prevent developer Frank Arciero from proceeding with the project until — and only if — a new report that complies with the law is prepared and approved.

“CEQA does not permit the lead agency to approve a large residential project before the full extent of the project’s impact on the environment is fully understood,” said Babak Naficy, attorney for the groups. “The judge found that this EIR failed on three grounds: (1) the description of the size of the project was inconsistent in the EIR and county resolutions, (2) the County had illegally deferred analysis of the project’s impact on water supply and (3) the mitigation of impacts on biological impacts was improper.”

“This is an extremely important habitat area for scores of threatened, endangered, and rare species, including the California condor, so it’s important that any development be carefully thought out,” said Adam Keats, urban wildlands director at the Center. “This is a huge victory for smart planning, especially considering the tremendous pressure from developers this area has been under.”

The proposed project is located west of Tejon Ranch’s massive Tejon Mountain Village project. That project has also been vigorously fought by TriCounty Watchdogs and the Center for Biological Diversity, among others.

Developer Frank Arciero first brought to the county project plans for a development that included more than 700 single family homes and a commercial area in 2003. Negative comments from a variety of community members on the original draft environmental impact report led Kern County Planning Department to pull the report and ask the developer to submit a new one, recommending that no more than 188 residences be built, but the next plan called for 557 residences. Urged on by Supervisor and Chair Ray Watson, the board of supervisors approved the updated plan and changed the zoning to accommodate the larger project.

The TriCounty Watchdogs, the Center for Biological Diversity, the Lebec Water Board, and even the county’s own planning department and commision, as well as many local residents were concerned from the beginning that the development was not well planned, threatened the area’s water supply, and didn’t represent smart growth for rural communities.
Posted by Rex Frankel at 10:15 AM No comments:

from the agendas of the boards of the Santa Monica Mountains Conservancy and Mountains Recreation and Conservation Authority:

resolution authorizing the Executive Officer to enter into a professional services contract with the law firm of Pircher, Nichols, and Meeks relative to certain interests the Authority may have in respect to the Chevron Whittier Hills acquisition and the proposed disposition of a portion thereof by the city of Whittier. [no attachment] MRCA 1/25/2012

grant application to the Wildlife Conservation Board and associated documentation for Verdugo Mountains (Mountain Oaks) property, City of Glendale. [Attachment] [Staff Report] [Resolution] [Map] [Map 2] [Map 3] SMMC 1/23/2012
The proposed application would be for approximate 50 parcels totaling approximately 42.5 acres. This is currently a single ownership with a willing seller interested in a conservation sale.

a new preserve in Sonoma county... 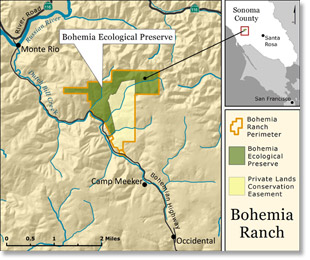 Two Sonoma County nonprofit conservation groups, Sonoma Land Trust and LandPaths, announced the creation of a new 554-acre nature preserve on the Bohemia Ranch located between Occidental and Monte Rio near Camp Meeker. The forested land adjacent to the famous Bohemian Grove contains a waterfall, camping potential and fields of rare plants. The new preserve, named the Bohemia Ecological Preserve, was created through the purchase of a conservation easement by Sonoma Land Trust and a pending donation of the restricted land by Ted and Phyllis Swindells to LandPaths, which will manage the property for resource protection and public use.

...Sonoma Land Trust purchased the conservation easement that extinguished the development rights over four parcels of land totaling 554 acres for $1.45 million. Purchase funds were provided by the Gordon and Betty Moore Foundation. The Parish family purchased 352 acres of the ranch and agreed to work with LandPaths to provide trail access across a part of their private land and to cooperate in the management of a shared watershed. The Swindells and the Parishes have pledged to provide $100,000 in seed funds for the management and stewardship of the preserve. 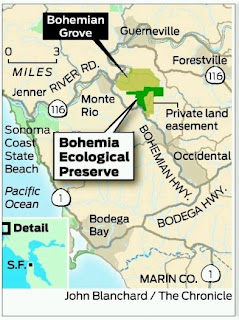 North of the new preserve is the famed redwood grove which is a private redwood conference center used by rich and well-connected groups. For more stories on this grove, click here: http://rare-earth-news.blogspot.com/search?q=Bohemian+grove
Posted by Rex Frankel at 12:12 PM No comments: