Tired of clean air, open space protection, and access to the beach? Sign this petition to let the "free" market rule!
This guy from the coast-side of the San Francisco bay, Oscar Braun, has been on an all-out war against the state's Coastal Commission for quite a while now. His newest effort is to outlaw all of the state's environmental protection laws at once.
Braun has been furious at the state and the County of San Mateo for thwarting his development plans on a 70 acre ranch which he bought in 1988 for $300,000 and later sought, unsuccessfully, to sell for $25 million.

The proponent for this measure, Oscar Alejandro Braun, must collect signatures of 807,615 registered voters - the number equal to eight percent of the total votes cast for governor in the 2010 gubernatorial election - in order to qualify it for the ballot. The proponent has 150 days to circulate petitions for this measure, meaning the signatures must be collected by April 19, 2012.

No public contact information was provided by the proponent.

To sign up for regular ballot measure updates via email, RSS feed, or Twitter, go to www.sos.ca.gov/multimedia."
Posted by Rex Frankel at 10:39 AM No comments:

So-Cal Sprawlers seek water from valley near the Amboy Craters in the Mojave Desert
the Cadiz water project is back!

Rejected in 2002 by the big water agency in So-Cal, the Metropolitan Water District, several smaller urban water sellers are now backing the project to "mine" water from a remote desert valley to provide water for 400,000 more people in the L.A.-Orange county areas. 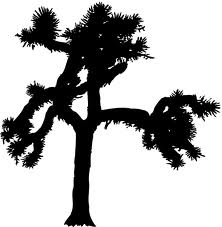 
"An environmental report has been released for a controversial plan to pump water from ancient underground basins in the eastern Mojave Desert and store Colorado River supplies there for delivery to Riverside County and elsewhere in Southern California.
The $225 million Cadiz Valley Water Conservation, Recovery and Storage Project would involve building 44 miles of pipeline to carry water in surplus years from the Colorado River Aqueduct to the company’s property, which lies between the Mojave National Preserve and Joshua Tree National Park.
In dry years, water would be pumped from the aquifer underneath the 35,000 acres owned by Cadiz Inc..."

More on local hearings in January and February of 2012 are in the above article. 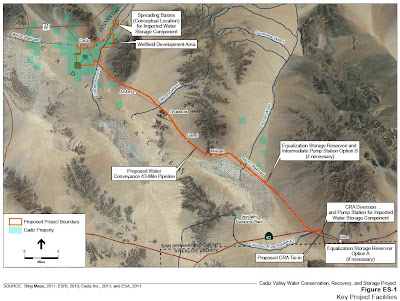 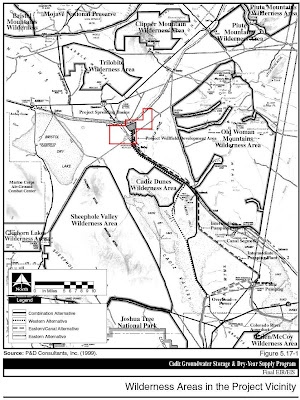 TO READ THE EIR:
http://www.smwd.com/operations/cadiz-project-draft-eir.html
Posted by Rex Frankel at 10:10 AM No comments:

Huge property in Santa Cruz Mountains to be preserved 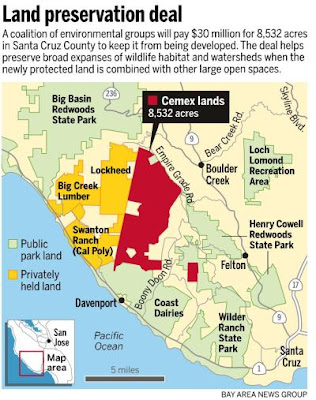 For 105 years, the towering Davenport cement plant on Santa Cruz County's rural north coast produced the cement that built Northern California, including such varied and prodigious projects as the Golden Gate Bridge, BART, Oakland City Hall, Folsom Dam, Candlestick Park and the Stanford University Medical Center.But now the plant, shuttered last year, is leaving a different kind of landmark. In one of the largest land preservation deals in the Bay Area in a generation, five conservation groups have signed an agreement to buy 8,532 acres around the plant for $30 million.
The property, which is 8 miles long and the largest piece of privately owned land in Santa Cruz County, stretches from the remote ridges of Bonny Doon almost to the Pacific Ocean. The broad expanse of redwood and oak forests is home to mountain lions, peregrine falcons and endangered coho salmon.
When the deal, funded with donations from Silicon Valley foundations and nonprofits, closes Dec. 16, it will help link 26,000 acres of protected open space from Big Basin Redwoods State Park to Wilder Ranch State Park -- an area about the size of San Francisco.


"This is a huge opportunity," said Walter Moore, president of the Peninsula Open Space Trust in Palo Alto, one of the buyers. "The inspiring, magical thing is that we've come together with a common vision to do something bigger and grander than we could have otherwise."
While the deal will eventually open the scenic land to hikers and outdoor enthusiasts, one provision will allow timber companies to continue to do some logging on the property -- which some of Santa Cruz County's most ardent environmentalists could oppose. But if the property had been sold to developers, its zoning and land use rules would have allowed up to 69 luxury homes. Although the property has been logged fairly regularly over the past 50 years, it does not contain a single house.
"It's really close to the 7.5 million people who live in the Bay Area," said Ruskin Hartley, executive director of Save the Redwoods League in San Francisco. "But it feels wild and remote."

Under the purchase, the environmental groups will pay Cemex, a Mexican building materials company that owns the land, for nearly all of its property, including a large dormant quarry. However, Cemex's hulking cement plant, visible for miles along Highway 1, is not included in the deal. Closed in January 2010 amid a lack of demand for construction materials, the plant remains for sale, along with a few hundred other acres and a second quarry.

Bankrolling the deal is a "who's who" of Bay Area land preservation groups. The Peninsula Open Space Trust will contribute $16 million. The Gordon and Betty Moore Foundation in Palo Alto, and the David and Lucile Packard Foundation in Los Altos will give a combined $8 million. The Sempervirens Fund, in Los Altos, will contribute $5 million and the Nature Conservancy in San Francisco, an additional $500,000.
Unlike previous open space deals in the Bay Area, the environmental groups do not plan to sell or donate the property to the California state parks department. Because of state budget cuts, Gov. Jerry Brown plans to close about one-quarter of California's 279 state parks by July and the state parks department is refusing nearly all new lands, even when they are donated.

Instead, the groups plan to spend the next two years conducting detailed biological surveys of the forests, streams and wildlife on the property. Then, they'll place a conservation easement over it, which will limit development, logging and other uses. That easement will be held by the Save the Redwoods League and the Land Trust of Santa Cruz County.Finally, the groups plan to sell the lands to a new owner, probably a timber company, and allow limited logging. The sale will not only help reimburse their purchase costs, they say, but it also will provide jobs and tax revenue to the county from the property, which is so big that it makes up 12 percent of all the land in Santa Cruz County zoned for timber harvesting.

Cemex and the previous owner, RMC Lonestar, logged nearly all of the land on a rotation of every 14 years, removing about 35 percent of the redwood and Douglas fir each time. Hartley said the environmental groups will put the several hundred old-growth trees off-limits, along with areas near streams where coho salmon and steelhead trout live."Our assumption is that when the dust settles, the protections in place will be stricter than those in the rest of Santa Cruz and San Mateo counties," he said.
Plans also include public access. There are about 70 miles of unpaved roads on the property, and the environmental groups hope to use the land to link Big Basin Redwoods with other parks and open space preserves stretching down the coast.
"I'd like to hope it would be in two or three years, but we have to do the management plan first," said Terry Corwin, executive director of the Land Trust of Santa Cruz County.
Politically, the wider plan will probably attract controversy in Santa Cruz County, known for its tenacious environmental activism. In 1998, working with money from the Packard Foundation, the Trust for Public Land in San Francisco bought the other huge property near the cement plant, the 7,000-acre Coast Dairies and Land Ranch, for about $40 million from several Swiss families whose descendants had purchased it a century before.
Although the land trust transferred six major beaches on the ranch to state park ownership in 2006, it has been thwarted from giving the bulk of the land to the federal Bureau of Land Management. Several local environmental groups, concerned about BLM ownership, sued to block the transfer, asserting that permission was needed from the California Coastal Commission to divide the parcels. The groups lost last year, but they have appealed the case.
Corwin said that in an era when state parks are not accepting new property, the Cemex redwoods deal offers a new model.
"We believe this is a newer and smarter way to do conservation," she said, "and in the end won't cost as much."

12/8/2011--The Santa Cruz County Land Trust and its partners have protected the 8,500 acres of redwood forest above Davenport formerly owned by CEMEX. Read the story in today's Sentinel.
http://www.santacruzsentinel.com/nationalbreaking/ci_19492730

See photos, a video, and learn more about the biggest conservation deal in county history on our website: http://LandTrustSantaCruz.org.
http://www.youtube.com/watch?v=xC6wzx7-9L0

11/16/2011--The Land Trust of Santa Cruz County has launched a campaign to protect 10,000 acres in the next two years. The first major project, the protection of the 1,200 acre Star Creek Ranch, will begin the protection of the Pajaro Hills. The Pajaro Hills are a 24,000 acre slice of old California that can become a future greenbelt between Santa Cruz County and the Highway 101 growth corridor.

The Land Trust has raised $11 million locally as part of this campaign – and needs just $2.5 million more to protect 10,000 acres.
Posted by Rex Frankel at 8:19 AM No comments: