Key Link in Circle of Parks around L.A. will be saved in October--for $6 million
Dear readers:

One of my favorite unknown hiking spots in L.A. is called Elsmere Canyon. This beautiful canyon has caves, a waterfall, cool rock formations and a stunning view of L.A. and Santa Clarita and almost no one knows about it.

However, this wildlife and trails connector leading from the Angeles Forest to Malibu and the Santa Monica Mountains is about to become public property.

The two canyons that make up this purchase, Elsmere and Grapevine, were formerly owned by the landfill operator BFI, and in the early 1990's Elsemere was proposed as the site of a mega-trash dump. At that time, three canyons along this wildlife corridor pinch-point (Sunshine, Towsley and Elsmere) were threatened with becoming L.A.'s newest landfills. With the purchase of Elmere by the City of Santa Clarita, two of those three canyons will be saved. The other canyon, Towsley, was saved in the mid-1990's and is now known as Ed Davis park. (Sunshine canyon got picked as the sacrificial lamb.) 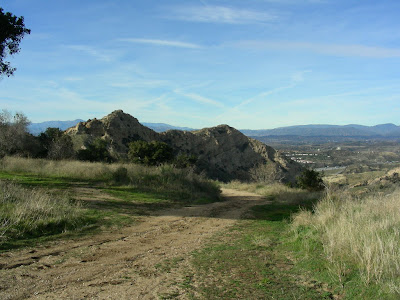 For details of the land sale: For photos of Towsley Canyon Park:

Consideration and possible Conservancy authorization to disburse up to $573,000 to the Mountains Restoration Trust to acquire undeveloped property in the Cold Creek watershed of the Santa Monica Mountains for habitat and open space preservation and compatible public access as a component of Cold Creek Preserve, Los Angeles County. 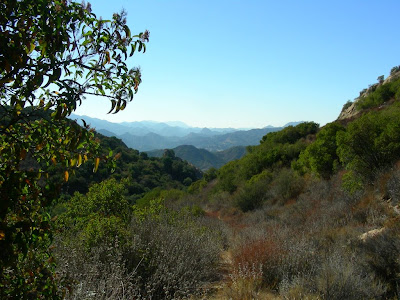 Total cost for the 78 acres is $2.5 million; the owner is the well-known speculator Tyron Sisson, who has sold other properties to the park services over the years in the Santa Monica Mountains.
The task for raising the purchase price and managing the land was handled by the Mountains Restoration Trust, http://mountainstrust.org

To see a photo tour of this addition to the park system:

http://picasaweb.google.com/Rare.Earth.fotos/ColdCreekHighTrailSMMtnsEastOfMalibuCanyon#
Posted by Rex Frankel at 2:14 PM No comments:

463 Acres are saved on on Santa Barbara Coast and inland...

The Hibbits Ranch is the largest single land holding within a block of scenic and highly productive farmland framed by the City of Lompoc, the Santa Ynez River and Santa Rosa Hills, and La Purisima Mission State Park.
The Land Trust was recently granted funds for a conservation easement on the Hibbits Ranch by the USDA Farm and Ranch Land Protection Program. A matching grant is pending from the California Farmland Conservancy Program and the Land Trust will need to raise an additional $150,000 in local funds to complete the transaction. More Hibbits Ranch information is located on our website:
http://www.sblandtrust.org/hibbitsranch.html

Plans for the South Parcel open space include restoration of native wetland and riparian grassland, coastal scrub habitat, and improved public trails.
"What was a dream of protecting and restoring the Ellwood-Devereux Coast is now becoming a reality," said Michael Feeney in a press statement. "Many people worked hard for many years –– our community should be proud and thankful." Visit our website for details about the project:
http://www.sblandtrust.org/southparcel.html

In 2007, the California Coastal Commission directed UCSB to permanently restrict development on the South Parcel if it planned to build more faculty housing nearby. As a result, the Land Trust and the university negotiated a conservation easement allowing only developments with public benefit, improved walking trails, interpretative signage, and an amphitheatre for outdoor education, as well as ecological improvements. This conservation agreement was permanently put into place in the spring of 2010.

Because the South Parcel property is a portion of land bordered by the Ocean Meadows Golf Course, Coal Oil Point Reserve, Devereux Slough, and Ellwood Mesa, it serves as a local conservation keystone, connecting various open space areas under different ownership and jurisdictions. By linking all of these properties, protection of the South Parcel will create a continuous open space totaling over 650 acres.
Posted by Rex Frankel at 11:09 AM No comments:

Water for nature, farms or developers?--legal fight in SJ Valley

9/5/2010--A story worthy of Hollywood will soon unfold in California courtrooms -- allegations of government corruption and corporate greed to rival the infamous Los Angeles water grab that inspired the film "Chinatown."

Call it "Chinatown II," a tale beginning 15 years ago -- when, according to lawsuits filed in the last three months, the state illegally turned over the publicly owned Kern Water Bank to an agency controlled by giant corporations in a backroom deal.

Filed by the Tucson, Ariz.-based Center for Biological Diversity, Northern California water districts and a fishing group, two lawsuits seek a court order putting the bank back in state hands. They allege the water bank is controlled by two corporations -- Roll International, owned by billionaire Beverly Hills businessman Stewart Resnick, and Tejon Ranch Co., one of the largest private landowners in California.

A third lawsuit, which includes the Kern water districts, asks the court to stop pumping from the water bank and require further analysis to determine how much water can be pumped without drying up neighboring wells...

...Gaylord Beeson won't forget the Kern Water Bank or July 29, the day his productive water well went dry. Nor will the 32 northwest Bakersfield customers in his small water association.

He blames heavy pumping by his neighbor, the water bank. The water table has dropped 115 feet in the last three years -- something that in the past would have taken two decades....

...Water levels in Rosedale are the lowest since the district was formed in 1959...

Through continuing farmland purchases, Paramount owns 120,000 acres, company officials say, making Resnick one of the biggest farmers in the state.

Tejon Ranch controls another 26% in the same way, the lawsuits say. The company plans the state's largest development -- Tejon Mountain Village, nearly 3,500 homes, dining, shopping and other amenities in the Tehachapi Mountains of southern Kern County.

Barry Zoeller of Tejon Ranch Co. disputes the lawsuits, saying his firm is a minor player with only 2% control of the water bank. The company controls only the Tejon-Castac Water District, he said.

But the legal action says Tejon Ranch also is the majority landowner in the Wheeler Ridge-Maricopa Water District, which controls 24% of the water bank....

8/28/2010--The first lawsuit in the San Joaquin River restoration has been filed by a west-side Valley farming family, claiming the replenished flows are damaging 13,000 prime acres, buildings and crops.

The Wolfsen family -- which includes the Skinner and Mueller families -- says the river has flooded, eroded and seeped into fields east of Los Banos.

A dollar amount for damages is not included in the case, which was filed Thursday in the U.S. Court of Claims in Washington D.C. An amount would be determined as the case proceeds.

A Wolfsen spokesman said the family is not trying to stop the long-awaited restoration, which began in October, more than 20 years after environmentalists sued to return water and salmon to the dried San Joaquin.

"This is a very narrowly focused lawsuit," Wolfsen spokesman Larry Harris said. "We want to preserve property and water rights."...


Will the Governor's New Reservoir plan evaporate more water than would be saved?

9/4/2010--As one veteran observer commented, “It’s never too early to form a JPA for an evaporation pond.” Meaning this may not be a wise place to store water.
The proposed Sites Reservoir is about 10 miles west of Maxwell in Northern California, on the east side of the Sacramento Valley. The Northern California Water Association (NCWA) says that Sites would be filled primarily by pumped diversions from the Sacramento River during peak flows in winter....

A reservoir at Sites was considered, and shelved, in 1970. DWR had looked at projected evaporation on another reservoir in the same location (Paskenta-Newville Reservoir) and reported that given the air temperature and winds off the backside of the coastal hills, Sites Reservoir would lose more in evaporation than it would make available for use elsewhere.

And that’s at last century’s temperatures, not the higher temperatures projected for this century.

Some knowledgeable people think this is actually a way to get water from the Eel River (despite Wild and Scenic Rivers Act protections) and make it available for the Central Valley and Westlands Water District.

Coincidentally, Thad Bettner, general manager of GCID (backers of the Sites reservoir), used to be the resource manager for Westlands Water District.
Posted by Rex Frankel at 10:49 AM No comments:

Santa Monica Mountains Land Saved--for August 2010, plus some in the San Gabriel's

A portion of Trancas Creek and Lagoon will be restored and provide a connection to other upland open space and beach areas thanks to a grant approved by the Bay Restoration Commission's Governing Board in June. Up to $1 million was awarded to the National Park Service and local restoration partners to purchase a seven-acre parcel just upstream of Pacific Coast Highway that contains portions of Trancas Creek and Lagoon. The grant will also support the initial phase of native plant restoration....
The project site is familiar to those who travel Pacific Coast Highway in Malibu , as it is adjacent to Howe's Trancas Market on the eastern side of the road. Governing Board member John Sibert, who is a Malibu City Council member, noted that the private seller has been cooperative with and helpful to the city and the project proponents.