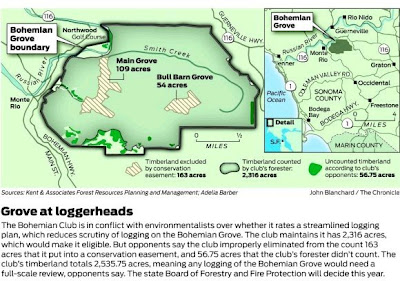 Since last year, the club has whittled down its inventory of holdings. It offered 163 acres for a conservation easement to the Rocky Mountain Elk Foundation in Missoula, Mont. Then its consulting forester, Nick Kent, eliminated 56.75 acres on the basis that they weren't available for commercial logging. The club said it qualified for the permit with 2,316 acres.

But the opponents - and their lawyers - say the law requires that all timberland should be counted and not just the commercially available land.

If all of the timberland is counted, the club has 2,535.75 acres, making it ineligible for the permit, the opponents say...

Posted by Rex Frankel at 9:17 PM No comments:

Plan Threatens the oaks of the Northern Sacto Valley...

June 2009--The Shasta Group, a Task Force of the Sierra Club's Mother Lode Chapter, has led a campaign to oppose plans by the Tehama County Planning Commission that would direct a huge amount of growth and development in the Interstate 5 corridor between Red Bluff and Cottonwood. These plans, as part of the revisions of the County's General Plan, call for development that would support a population size of approximately 400,000 people.

According to the Shasta Group, the Draft Environmental Impact Report (DEIR) released in September 2008 scaled back this projected population size to 25,000 and performed analysis based on this figure. The group also states that the DEIR does not address how the region would supply enough water to accommodate the population growth or make any effort to minimize significant or unavoidable negative impacts.

The Shasta Group has partnered with other organizations and citizen groups to submit comments to the DEIR and continue to mount oppostion to the General Plan revisions.

Please read an article from the Shasta Group Newsletter. http://motherlode.sierraclub.org/shasta/newsletter.pdf 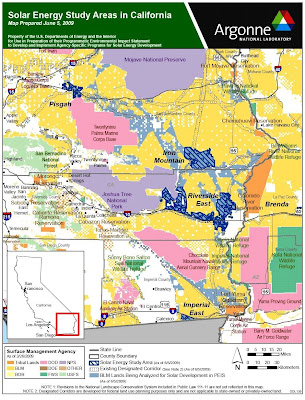 Note: Acreages are approximate. Source: U.S. Department of the Interior
Posted by Rex Frankel at 10:21 PM No comments:

A federal judge in San Francisco Tuesday struck down national forest management rules devised by the Bush administration that environmentalists had denounced as a thinly veiled sop for timber companies. U.S. District Court Judge Claudia Wilkin ruled in favor of a group of 14 environmental organizations that sued the U.S. Forest Service for essentially relaxing regulations in violation of the National Environmental Policy Act and Endangered Species Act. The decision means the Forest Service will have to reinstate rules protecting fish and wildlife and limiting logging in 150 national forests and 20 national grasslands covering 192 million acres, including more than a dozen national forests in California. "It is a great victory for national forests," said Marc Fink, a lawyer for the Center for Biological Diversity, which was one of the plaintiffs. "We're hoping today's ruling is the final nail in the coffin for the Bush forest policies and that we can move forward and do what is right for the forests." The National Forest Management Act passed in 1976 requires that the Forest Service adopt rules that restrict logging, protect streams and have guidelines to protect the diversity of plants and animals in each national forest. The original Forest Service rules adopted in 1982 did just that, according to Fink. The Forest Service first tried to weaken the nationwide regulations in 2000. The Bush administration then tried to gut the wildlife protections, Fink said, disguising the changes as an attempt to reduce bureaucracy and increase flexibility. The disputed new rules, first adopted in 2005 and then again in 2008, repealed the 1982 regulation requiring that fish and wildlife habitats be managed to maintain "viable populations" of fish and wildlife species, according to the lawsuit. This was the rule that led to restrictions on logging to protect species like the northern spotted owl. The Bush administration rules also removed limitations on the clear-cutting of trees, requirements for buffer zones around streams during logging, and repealed regulations requiring formal environmental reviews and advance public notice before national forest plans are adopted. The lawsuit said the regulations discarded the environmental standards envisioned by the 1976 act in favor of vague guidelines administered by local forest managers with little public oversight. Judge Wilkin ordered the Forest Service to reinstate regulations from either 1982 or 2000 that had specific protections for fish and wildlife. U.S. Forest Service representatives familiar with the ruling could not be reached for comment Tuesday afternoon, but Fink and others said they are confident Forest Service officials under President Obama will be more sympathetic than previous administrators, at least one of whom was a former timber industry lobbyist. Fink said the court decision will affect the management plans for 14 Forest Service properties in California, including Tahoe, Modoc, Klamath, Stanislaus, Sierra, Inyo, Sequoia, Lassen and Plumas national forests.
Posted by Rex Frankel at 10:14 PM No comments:

A message from the Editor of Rare Earth News:

We non-corporate funded environmentalists are very grateful for your story.

Urban Growth is all about money: money for politicians’s campaign funds, jobs for construction workers, and windfall profits for land owners. But it also means a fake boost in tax dollars that is erased by all of the services needed by the residents of that growth.

Local elected officials for years bought the builders’ baloney that mega development was the solution to local government’s budget woes. It’s not so. This faulty and unscientific belief was repeated unquestioned for years by the mainstream press. It’s been up to us, the independent activists and the independent press, to show that the growth emperor was not only naked, but he was drunk and blowing all of our money.

A landmark study debunking the claims that development equals prosperity is at this link:

Basically, if development was the salvation to ’s budget woes, ’s mega-growth since year 2000 would mean our budget would be fat and our taxes would be low. But ’s run a massive budget deficit for this entire decade even when the economy was “good”, when the stock market and “credit derivatives” were not bad words.

Growth never pays for itself. If it did, we would have the lowest taxes in the country, not the highest.

An underlying theme in Patrick Range McDonald’s article was that by working-with developers and polluters, some enviro groups think they can make a difference. Usually, they get worked-over, and the public gets the bill.

We call it greenwashing because the developer still gets a massive project and we still get the traffic jams, but we also get feel-good billboards telling us that we wrecked our neighborhood in a green way. It’s like telling us that cancer is good for us because it’s “growth”.

Growth is not always good, no matter what urban planning theorists tell us.

The biggest problem with smart growth is that in , at least, the decision to curb city’s sprawl can be erased because and the city of still approve big projects on our borders. We can concentrate growth in downtown , and we can reject Rancho Las Lomas (sprawl in north San Fernando Valley), and then still intends to cram the Tejon Ranch project down our throats. That’s why we need to fight the entire 30,000 home wildlife-killing traffic jamming Tejon Ranch deal, no matter how many corporate enviro groups they’ve bought off. See http://savetejonranch.org/ for more,

Smart growth works elsewhere, but only when all the local governments agree to it. has a great voter-created system of greenbelts around their cities. These are very effective urban growth boundaries. In the area, most of the counties have these UGB’s. UGB’s have even spread to the developer-friendly . This keeps the growth from escaping from one less developer friendly city to another.

Coupled with these UGB’s in most places that have them are local land trusts and tax-dollar funded park purchase agencies that buy up the greenbelts that the voters put off-limits to development.

This means that growth, if it must occur at all, is forced to stay in our downtowns.

has been the worst player in urban sprawl and destroying the natural environment, but most of the rest of our state has learned from this lesson and does everything possible to avoid becoming like us.

Even some of ’s politicians are trying to turn this town around. Mayor Villaraigosa has been light-years better on green issues than any mayor before him.

I consider Bill Rosendahl, our Westside councilman, a good friend. Compared to the openly hostile relationship we had with his predecessors Cindy Miscikowski, Ruth Galanter and Pat Russell, Bill is open, friendly, and not bought-off.

The rubber is about to hit the road with two mega projects in Bill’s 11th district which are coming to the planning commission soon: the Howard Hughes Center on July 23rd and Playa Vista phase 2 later this summer or fall. Do we need another 3000 luxury condos? Do we need to let our yards turn brown so these towers can go up?

Are the politicians going to fall for the usual developer B.S. again or will they really make the greenest city in the nation? If they don’t, we’re here to drag their asses into court…again.

-
Groups and Cities Sue Over CA Supertrain Route
from http://hsr-letsdoitright.com/lawsuit.html

In November 2008, voters approved Proposition 1A, which authorized the state to issue almost $10 billion dollars in bonds to support a new High Speed Rail system for California. Whether you voted for the train or not, here are several problems with the current plans that haven’t gotten too much public attention: 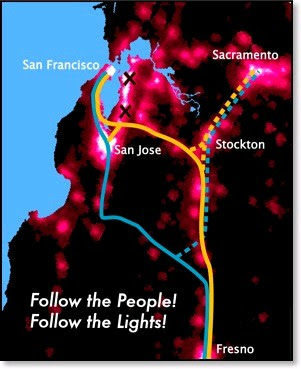 The route chosen by the California High Speed Rail Authority uses the Pacheco Pass (blue on the map) as the entrance to the San Francisco Bay Area. The Altamont Pass (yellow on the map) is the alternative that makes the most sense from both an environmental and transportation perspective. The Altamont Route would have the least impact on wildlife and natural resources, and would put the new rail facilities in areas where the maximum ridership could be developed – including access to Sacramento and Stockton.

Unless strong and certain measures are put in place to protect agricultural and natural resource lands, building a major new transportation corridor through the Central Valley could actually spread suburban sprawl.

The Planning and Conservation League (PCL), the California Rail Foundation (CRF), the Transportation Solutions Defense and Education Fund (TRANSDEF) and the Bay Rail Alliance have joined the Town of Atherton and the City of Menlo Park in a lawsuit challenging the California High Speed Rail Authority (CHSRA).

What is the lawsuit?

The suit charges that the CHSRA’s Environmental Impact Report (EIR) for the current peninsula route violates a California law requiring that projects follow the least environmentally harmful path and that the EIR has several faulty and missing points of information. It demands that the EIR be redone to an appropriately rigorous standard.

What will winning do?

Winning would oblige the CHSRA to reconsider the Altamont Pass route, which would connect the East Bay with Caltrain in Redwood City via a rebuilt Dumbarton rail bridge. This route was previously favored by the predecessor body to the CHSRA, and many believe it has significant environmental and ridership advantages. Whether the lawsuit wins or loses (to be determined in May), it will provide important leverage in negotiations with the rail authority as our local cities seek to mitigate the adverse impact of rail developments.

The State's Website:
http://www.cahighspeedrail.ca.gov/
Posted by Rex Frankel at 9:44 AM No comments: