-
Ventura County Sprawl Fighters Not Resting on their Accomplishments
http://soarusa.org/

Between 1995 and 2000, voters in Ventura County overwhelmingly approved a series of ballot measures – the SOAR initiatives – which effectively created the most comprehensive protection against urban sprawl of any county in the United States. 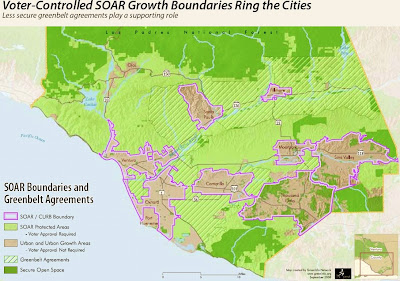 In contrast to Los Angeles and Orange counties, Ventura County has not turned into a single large urban mass. Our cities remain distinct, each with a unique sense of identity and place, defined in no small measure by the intact expanses of open space and farmland that surround them.

Analysis by the countywide SOAR organization determined that today, one in four acres of open space and agricultural land is at risk of sprawl development within the next 10 to 20 years, and much more will be at risk if the SOAR boundaries are allowed to expire.

To read the full 32-page report, go to http://soarusa.org/and click on the "At Risk Report" link 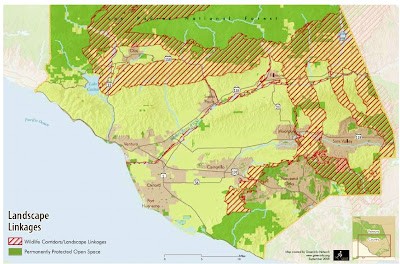 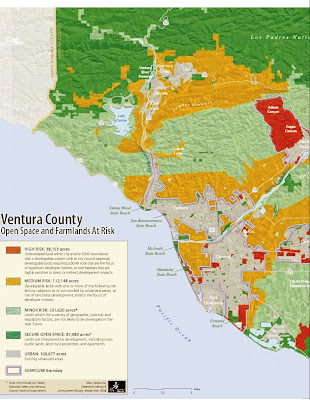 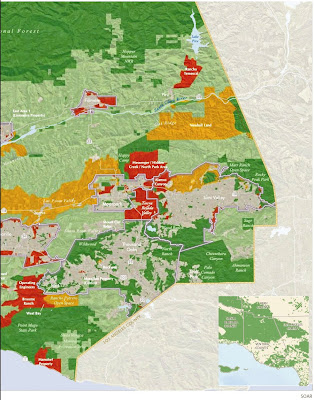 Posted by Rex Frankel at 5:51 PM No comments:

Labels: Urban Growth Boundaries, Ventura
-
Is the NFL Finally Coming Back to L.A. at the Puente-Chino Hills Wildlife Corridor?
News from http://hillsforeveryone.org

If you have kept up with the newspapers you know that the City of Industry, in its long standing and traditional partnership with Majestic Realty are attempting to push through a NFL stadium at the juncture of the 57/60 freeways on the undeveloped hills there. The stadium will also, of course, be a venue for concerts, etc. Walnut residents are hopping mad - so you may want to show up to this meeting to let Majestic know how you, as residents of the area, feel.

If you are opposed to this project, follow the link: http://www.nonflstadium.com 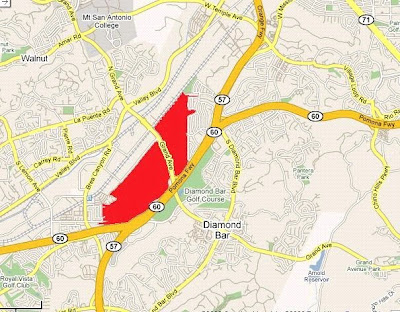 Posted by Rex Frankel at 5:14 PM No comments: 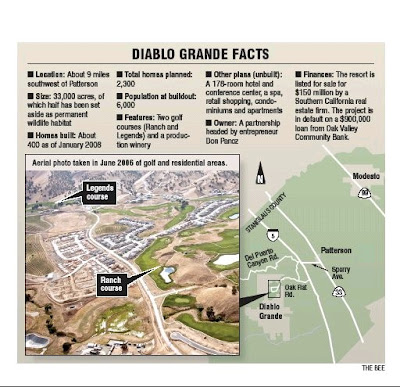 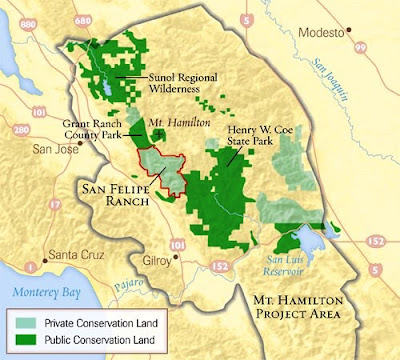 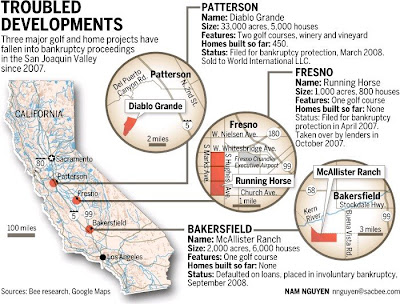 Posted by Rex Frankel at 4:13 PM No comments: 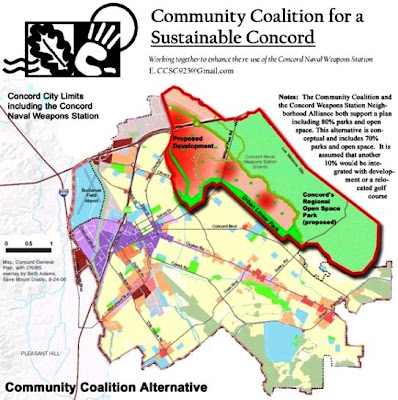 -
URGENT: Concord Naval Weapons Station City Council Meetings - Let your voice be heard!
December 1st, 2008 and January 12th, 2009
The Concord Council will continue to hear from the public about all aspects of the two alternatives before them. Thanks to those who attended the meeting on November 17 - we packed the room and 208 people attended. We need people to attend on Monday, December 1 and on Monday, January 12th, both meetings at 6:30 pm at the Baldwin Park Concord Senior Center at 2727 Parkside Circle. Both upcoming Council meetings are important; the city could decide to hold just one meeting. The conclusion will be that the city chooses a preferred plan and makes its recommendation to the Navy for a Reuse Plan.

It's important that they hear from the public that we would like:

-- increased open space--80% of the 5100 acre site.
-- a wider linear park along the boundary with existing neighborhoods.
-- solid guarantees that the open space will be transferred to EBRPD as a public benefit conveyance (so that it will cost the public the least) as a new regional park.

Save Mount Diablo is a member of the Community Coalition for a Sustainable Concord, http://www.ebho.org/artman2/publish/concord/CCSC.shtml. We will have flyers with additional information at the meeting and Community Coalition stickers that we hope you will wear, identifying yourself as a supporter.

-
13 New State Parks are Proposed for the Central Valley 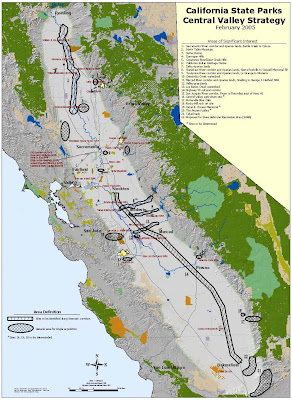 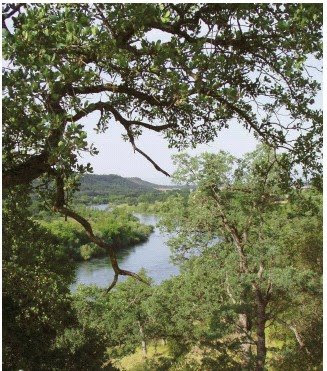 The draft “Central Valley Vision Implementation Plan” is a twenty-year plan that focuses on meeting the public’s recreation needs in the .

Please submit your comments and suggestions to us at centralvalleyvision@parks.ca.gov or mail to the address below by December 15, 2008.

The lawyers say: “This document is for long-range planning purposes only and does not imply a land acquisition or development commitment. The maps and text indicate potential land uses and suggests ways in which the plan may be carried out. Funds to implement most of the plan’s recommendations are not yet available. Many proposals, especially those that are not high priorities, may not occur for many years. If lands are to be acquired, they will be purchased only from willing sellers. Development proposals will be subject to full environmental review and regulatory approvals prior to moving forward.”

When implemented, the Central Valley Vision initiatives will enhance outdoor recreation opportunities by:

• More than doubling the number of picnic sites, from almost 900 to almost 2,000 sites.

• six new parks in the and to provide recreation for rapidly growing and underserved populations and protect special resources;

• one new park in that will help link other conserved areas to the Delta.

Also recommended are five heritage corridors to interpret the Valley’s history and culture and boating trails to link outdoor recreation areas on rivers and waterways.

The California Delta Heritage Corridor would link historic Delta towns, recreation sites, nature areas and farm stands. Highlights: Historic communities such as Rio Vista and Locke; recreation areas such as Big Break; wildlife and fish habitats such as Woodbridge Ecological Reserve; agri-tourism attractions such as “U-pick” fruit orchards and festivals; trails such as parts of the American Discovery Trail; and Delta excursion boats.

The Black Gold Heritage Corridor would connect sites associated with oil development in Kern and Kings counties. Highlights: Important oil fields such as Elk Hills; refineries; museums such as the ; and events such as “ sound” performances at Buck Owens’ .

Echoes of Our Ancestors Corridor: The Great Central Valley has been home to many diverse cultural groups, beginning with Indians. This heritage corridor take aspects of the history of ’s rich ethnic diversity and links them together.

Proposed parks. The thirteen proposed new parks are (from north to south):

• Protect the viewshed by securing about 165 acres from BLM.

• Acquire about 225 acres of riverfront property.

• Acquire about 2,000 acres of riverfront property.

• Restore about 180 acres of wildlife habitat.

• Acquire about 13 acres and restore about 140 acres of wildlife habitat.

• Develop about 150 campsites (outside of ), 50 picnic sites, trails, and interpretation.

In Amador, , Placer, and

• Partner with local landowners along the to acquire about 1,500 acres.

In Contra Costa, , San Joaquin and :

• Acquire about 200 acres and restore about 100 acres of wildlife habitat.

• Acquire about 1,600 acres and restore 500 acres of wildlife habitat to create a new State Park at the confluence of the San Joaquin and , and would provide a recreation area near .

• Accept about 1,250 acres of existing public land in new park.

• Create a new park to provide recreation and a water trail on the .

• Partner with , Army Corps of Engineers and Kings River Conservancy to acquire 500 acres on .

• Acquire about 2,300 acres to create a new park that celebrates Native American culture.

• Acquire about 420 acres and restore about 300 acres of wildlife habitat.

• Cooperate with partners to acquire 60,000 acres to establish a new park at the south end of the .

2003 Property for the State Park at Sutter Buttes acquired (the first new in 20 years).

Posted by Rex Frankel at 9:39 PM No comments:

-
357 Acres in Sonoma and East S.F. Bay Up for Purchase by Coastal Conservancy

6. Consideration and possible Conservancy authorization to disburse up to $1,500,000 to the Sonoma County Agricultural Preservation and Open Space District, toward the acquisition of the 283-acre Sonoma Mountain Ranch, Sonoma County, for the protection of open space, natural resources and for public access consistent with those purposes. http://www.scc.ca.gov/webmaster/ftp/pdf/sccbb/0812bb/0812Board06_Sonoma_Mountain_Ranch.pdf 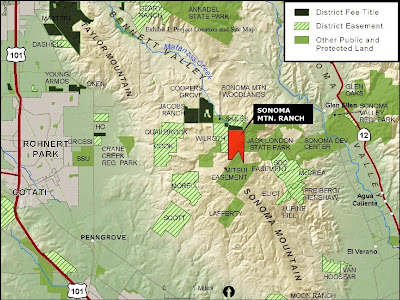 9. Consideration and possible Conservancy authorization to disburse up to $600,000 to the Tri-Valley Conservancy to acquire the 74-acre Bobba property, located in the South Livermore Valley Area of eastern Alameda County, for the purpose of providing public access and protecting scenic and open space values and preserving agricultural uses. http://www.scc.ca.gov/webmaster/ftp/pdf/sccbb/0812bb/0812Board09_Bobba_Property.pdf

16. Consideration and possible Conservancy authorization to disburse up to $200,000 to the Sonoma County Regional Parks Department to prepare a feasibility analysis and environmental documentation for coastal trail access through the Timber Cove area in northern Sonoma County. http://www.scc.ca.gov/webmaster/ftp/pdf/sccbb/0812bb/0812Board16_Timber_Cove_Coastal_Trail.pdf
Posted by Rex Frankel at 11:01 AM No comments:

--Alamos Canyon purchase on west side of Simi Valley

Consideration of resolution authorizing a comment letter to on Notice of Proposed Project for principal dwelling unit and associated development, 10 acres on , Project No. LU08-0088, Little and watersheds. [Comment Letter] [Resolution] [Attachment] [Map]

Consideration of resolution authorizing the addition of Compton Creek - North of 91 Freeway and South of Greenleaf Boulevard to the Conservancy Acquisition Workprogram to allow Los Angeles County Regional Park and Open Space District to provide Proposition A Excess Funds to the Mountains Recreation and Conservation Authority for acquisitions and improvements within said project area, Compton. [Staff Report] [Resolution] [Map 1] [Map 2]

Consideration of resolution amending Resolution No. 07-100 to further assign the Mountains Recreation and Conservation Authority to be the Conservancy’s designee to implement Los Angeles County Regional Park and Open Space District Project Agreement No. 58A1-94-0132 to acquire property within the Escondido Canyon Watershed, Santa Monica Mountains, Malibu. [Staff Report] [Resolution] [Attachment]
Consideration of resolution authorizing an augmentation to Grant No. smm-0798 to complete the acquisition of the 650-acre Rancho Corral acquisition, , unincorporated . [Resolution] [Map] [Staff Report]

Consideration of resolution authorizing both fee simple and easement transfer of Transfer of Jurisdiction Nos. 1505-02-01, 1509-01-09, 48060-01-01 and 48067-01-01 to the City Calabasas and retention of a conservation easement on all parcels if transferred in fee simple, Valley Circle Boulevard and 101 Freeway Interchange,Los Angeles. [Staff Report] [Resolution] [Attachment] [Map 1] [Map 2]