Even More New Parks to Explore....

In North L.A. County:
Antelope Valley Poppy Preserve--adjacent, to be solar power mitigation site
http://www.fairmontbuttemotorsportspark.com/
11/20/2010, Developer bows to opposition to racetrack, By: Craig Currier, Antelope Valley Press
ANTELOPE ACRES - The developer who proposed building the Fairmont Butte Motorsports Park has decided to scrap his plans and sell the property, reportedly to a solar developer for use as mitigation land and remain as open space.

TWO BIG PURCHASES IN THE WORKS

Several local parks agencies are negotiating the purchase of the Rio Dulce Ranch and the Vulcan Materials parcels which total a little over 2000 acres. They form the keystones in a bigger plan to link the two halves of the Angeles National Forest, which is divided with private0owned lands due to the federal giveaway of land to the Southern Pacific Railroad in the late 1800's, which ran its tracks through the corridor. My contact at the parks department says the State's Wildlife Conservation Board is planning to commit around %5 million to purchase these two parcels.

Efforts so far to connect the two halves of the forest can be seen at the famous Vasquez Rocks county park, and parcels shaded purple, green and yellow in the map below.

I wrote more on this issue here:
http://rare-earth-news.blogspot.com/2011/03/land-deals-for-la-mountain-parks-in.html


PICTURES OF THE CORRIDOR: 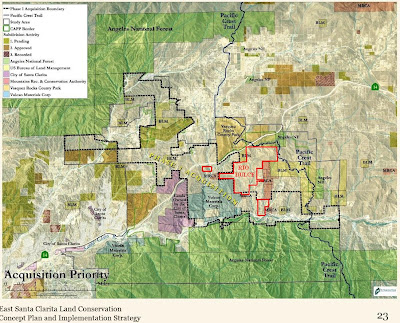 CLICK ON MAP TO ENLARGE
Posted by Rex Frankel at 3:41 PM