Tribe seeks to buy 47,000 acres along the Klamath River from timber giant...

Yurok Tribe seeks big land deal along the Redwood Coast, at the mouth of the Klamath River
excerpted from:
http://www.latimes.com/news/local/la-me-redwoods-yuroks-20101226,0,3593074.story

...The tribe is asking Rep. Mike Thompson (D-St. Helena) to introduce legislation that would transfer 1,200 acres of a woody knob of Redwood Park and 1,200 acres of redwood stands in the Six Rivers National Forest to the tribe. The Yurok are also seeking control of Redding Rock, an offshore sea stack that is part of the California Coastal National Monument.

...An early draft of the proposed legislation authorized a $50-million allocation to the Yurok to purchase 47,000 acres of commercial timber land. The tribe later withdrew the provision, saying that the appropriation was politically untenable and that the Yurok leadership never signed off on it.

But the tribe has other resources to which it can turn. The Yurok's seven-year land-acquisition project is driven by a sophisticated campaign that has yielded million of dollars in loans and grants from federal, state and private sources. The Western Rivers Conservancy is helping the Yurok raise the estimated $73 million required to purchase the timber land. Earlier this month the state water board awarded the tribe an $18.7 million loan to purchase a portion of the timber property... 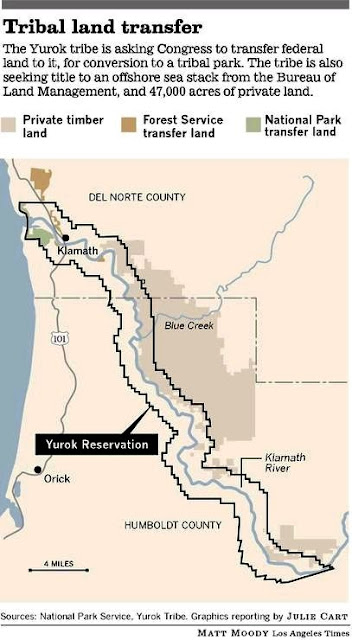