Oil Company trying to find a local government that will OK its Planned Destruction of East L.A. County to Orange County Wildlife link 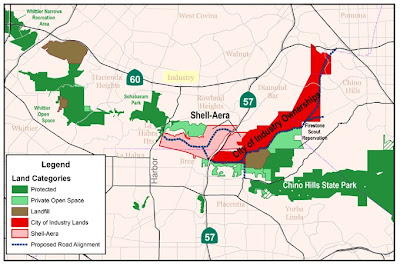 
Aera Energy, the wholly owned subsidiary of Shell/ExxonMobil owns the natural lands above Brea and Rowland Heights, between the 57 Freeway and Harbor Blvd. The company appears to be playing a strange game.

After five years of processing its 3,600 unit development through Los Angeles County, Aera was told by the County to revise and downsize the project. Instead, in late 2006, Aera picked up stakes and took the same project proposal to Diamond Bar in hopes of being annexed into that city. Again, Aera was told to make it a greener project, downsize, and reduce the footprint (grading). Now Aera is no longer processing the project in Diamond Bar and the city will soon be formally ending the application.

Despite an additional 50,000 vehicle trips a day generated by the project, Aera continues to refuse to pay for improvements to the 57 Freeway. Both Diamond Bar and Brea are not happy about that. Apparently Aera plans to return to Los Angeles County for project approvals, but the County has not yet received a formal application. It will be interesting to see if the project has changed. Aera has long touted a need for executive homes but the bottom has dropped out of that market in the recession and there is a flood of executive homes for sale.

In the meantime, the Aera property was on a short list for potential funding from Measure M, Orange County’s transportation sales tax measure, to save the land. Aera had stated publicly that they were willing to look at a sale for preservation by using funds from this measure, but in April, Aera removed itself from consideration. The next round of funding comes in the summer of 2011.
Posted by Rex Frankel at 10:38 AM