"FIREHOUSE HILL" HAS BEEN SAVED! 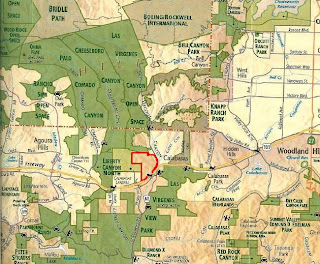 "Firehouse Hill" is the 200 acre, 600'-high wooded hillside that dominates the view coming down the Ventura Freeway toward Las Virgenes Road. It is the southern end of a seven-mile-long, 1000'-high ridge extending southward between Cheeseboro Canyon and the former Ahmanson Ranch.

Developers have had this hill in their sights for the past quarter century, with plans at various times to construct over a hundred condominiums and ridgetop mansions, and, at one point, a huge shopping center. Last week, instead, Firehouse hill was purchased by the Santa Monica Mountains Conservancy for $6.25 million, and will now remain natural park land in perpetuity. Former Task Force Co-Chair Margot Feuer once complained of the Santa Monica Mountains that "there was no there there", meaning that there was no major destination in the park to tell visitors they had arrived. The purchase of Soka took care of the "there", but there still hasn't been a real entrance to the park that differentiated it from the developed areas adjoining it. With the purchase of Firehouse Hill the passing motorist will now have no doubt that he has reached protected park land. Firehouse Hill is only a few steps from the Las Virgenes Interchange and an MTA bus stop, but it will be the staging area for over 10,000 acres of state and federal parkland in the upper Malibu Creek watershed.


New Park and Some Cute New Constituents (From Senator Fran Pavley's e-news)
I was honored to take part in the special dedication of a 200 acre property in Calabasas. The creation of the new park, which was spearheaded by L.A. County Supervisor Zev Yaroslavsky and was named in his honor, was made possible thanks to mitigation funds from the Calabasas Landfill. We are all grateful that property owner Fred Sands became a willing seller and realized the scenic and ecological value of the property for future generations. The site will be owned and maintained by the Mountain Recreation and Conservation Authority arm of the Santa Monica Mountains Conservancy.
The big news of the day came when Santa Monica Mountains National Recreation Area Superintendent Woody Smeck announced that I have three new constituents. Eight-week-old mountain lion cubs were recently born in the Agoura Hills area of the Santa Monica Mountains – proof that wildlife corridors and preservation of open space areas are critical to the survival of our large mammal populations such as mountain lions and bobcats. Each mountain lion kitten has been implanted with a tracking device that will allow researchers to follow the kittens' movement.
Posted by Rex Frankel at 8:19 AM