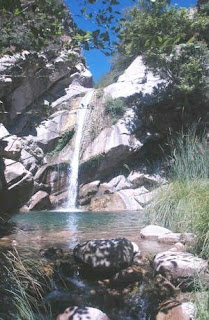 The land surrounding the trail to the waterfall is owned by Shull Bonsall, who also owns a 6500 acre ranch called Canada Largo which he is seeking to urbanize and annex to the city of Ventura

5/5/2010-- Without admitting any wrongdoing and in lieu of paying civil penalties, Bonsall agreed not to violate the law in the future and to donate two acres of land along the Ventura River to the Ventura Hillsides Conservancy, McWaters said.
Posted by Rex Frankel at 12:56 PM