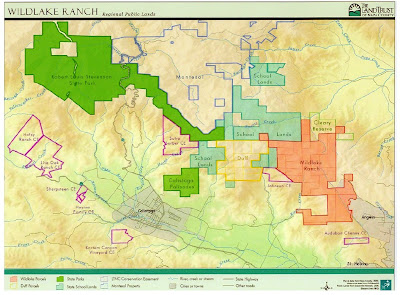 "the longest "mansion free" viewshed on any of the surrounding ranges in the Napa Valley."

...When the Land Trust bought the 4,000 acres on the Wildlake and Duff properties, the plan was to negotiate a sale to the state for the land to be used as a park with public access. The Land Trust’s “Napa Valley Wild” campaign raised $27 million to acquire the properties, of which $24 million was used to purchase the two pieces of land. ($2 million in state funds were contributed to the sale by the Coastal Conservancy.)

Yet the state’s financial problems have caused this process to stall indefinitely. Consequently, the Land Trust is now charged with the stewardship of the property....

Ultimately the goal was to add both new acquisitions to Robert Louis Stevenson State Park and create a 13,000-acre oasis of protected, undeveloped land....

for a map of preserved lands in Napa County: