Statewide Trails Progress Report is out...

-
How is our State's Connected Trails System Doing?
read this short report: 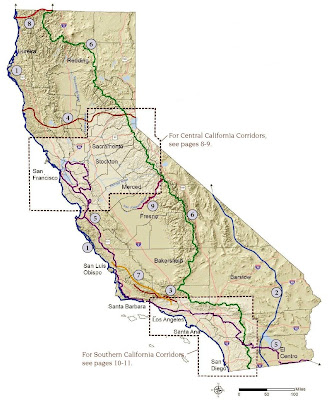 3--Condor Trail. Managed by the Los Padres National Forest. Eighty percent of this trail’s 130 miles is on existing dirt roads. It travels through lower elevation areas in Santa Barbara and Ventura Counties.

4--Cross California Ecological Corridor. No current manager. The route for this trail is only roughly planned at present. This trail is envisioned as a heritage corridor generally following Highway 20.

5--Juan Bautista De Anza National Historic Trail. Managed by the National Park Service. This 900-mile Heritage Corridor traces the route of Spanish explorer Juan Bautista De Anza in California and Arizona. The 220 miles of non-motorized, multi-use unpaved trail and 800 miles of the auto-route component are open to the public. This trail links the significant historic routes of the expedition. Portions of the corridor are shared with other regional trails.

6--Pacific Crest National Scenic Trail. Managed by the US Forest Service. This trail is one of only three national border-to-border trails in the United States. The 1,692 miles of non-motorized hiking and equestrian trail extend along the Sierra Nevada and Cascade Mountains from Mexico to Canada and are entirely open to the public. Improvements and realignments continue to improve the user experience.

7--Questa to Sespe Trail. Managed by the Los Padres National Forest. This 250-mile trail runs on existing dirt trails and roads from the Cerro Alto campground west of Atascadero in San Luis Obispo County to the Sespe Condor Sanctuary near Fillmore in Ventura County.

8--Redwood Coast to Crest Trail. No current manager. No major progress on this trail plan has been made since 2002. This trail is planned to be approximately 120 miles long from Crescent City on the coast to the Pacific Crest Trail in the Cascade Mountains. 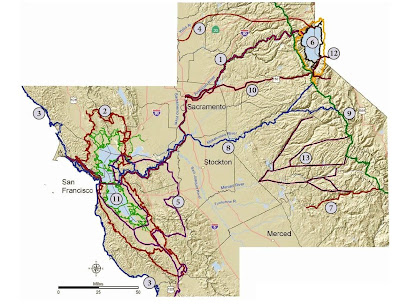 2--Bay Area Ridge Trail. Managed by the Bay Area Ridge Trail Council. Currently, 310 of the 550 planned miles are open to the public. This trail creates a contiguous system for long distance hiking over a variety of terrain in the Bay Area by utilizing existing trails within Open Space and Park Districts on ridges in nine San Francisco Bay Area counties.

6--Lake Tahoe Bikeway 2000. Managed by various local communities. This planned system of bike trails and bike routes will utilize existing roads and trails within Lake Tahoe Basin communities. Approximately 80% of the bike system is completed and open for use.

7--Merced River Trail. Partially managed by BLM. No formal plan or management strategy currently exist for this trail. This potential 28-mile trail would follow a historic railroad bed which goes through Sierra National Forest and Merced Irrigation District properties. It is heavily used by the public due to its spring wildflower displays and easy accessibility.

8--Mokelumne Coast to Crest Trail. Managed by the East Bay Municipal Utilities District and USFS, BLM and PG&E. About 112 of 330 planned miles of this non-motorized, multi-user trail are open to the public. The trail runs through a diverse landscape as it travels from the East Bay hills through the delta, across the valley, up the foothills and to the peaks of the Sierra.

10--Pony Express National Historic Trail. Managed by the National Park Service. This Heritage Corridor and Auto Tour Route extends 140 miles in California, tracing the historic route of the Pony Express from 1860-1861. NPS has no land management authority for the trail; it depends heavily on its partners—federal, state, and local governments and private citizens—to preserve existing remnants.

11--San Francisco Bay Trail. Managed by the Association of Bay Area Governments. The trail encompasses nine Bay Area counties, 47 cities, and local government and private properties. Of the 500 miles planned, 290 miles are open to the public. It connects to 60 other local and regional connector trails and provides unique connectivity around the Bay, including through San Francisco and across the
Golden Gate Bridge.

12--Tahoe Rim Trail. Managed by the Tahoe Rim Trail Association. This completed 165-mile multi-use trail follows the ridge-tops surrounding Lake Tahoe and links to connector trails from many of the Basin’s communities. Modifications to the alignment continue to improve user experience and trail sustainability. Through the Desolation Wilderness, the trail shares alignment with the Pacific Crest National Scenic Trail.

13--Tuolumne Complex. No current manager. The Tuolumne Complex of trails has high potential but is not yet completed as a regional system. Some segments are listed as proposed trails in the 2002 Tuolumne County Recreation Master Plan. Most of these trails are former railroad beds that go through properties of the Stanislaus National Forest, BLM, CSP, Tuolumne County and private individuals. They exist in various levels of management and disrepair and are not publicly promoted, but are regarded as “unofficial” trails in the various jurisdictions and communities they traverse. 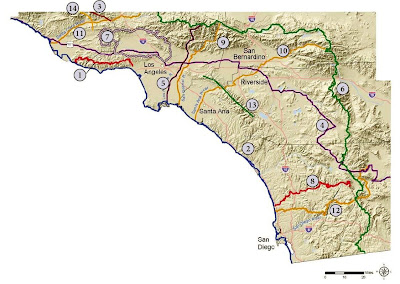 1--Backbone Trail. Managed by NPS’s Santa Monica Mountains National Recreation Area. This 63-mile trail is a patchwork of fire roads and existing and new trails. It provides unique opportunities for long-distance trail use for citizens within the metropolitan Los Angeles area.

7--Rim of the Valley Trail. Managed by NPS’s Santa Monica Mountains Recreation Area. About 93 of 200 planned miles are completed and open to the public; 5.7 miles are currently signed as belonging to the Rim of the Valley trail system, with the remainder associated with other trail systems. Federally funded planning for open space associated with the trail will begin soon.

9--San Gabriel River Trail. Managed by the Los Angeles County Departments of Public Works and Parks and Recreation. This 38-mile multi-use trail along the San Gabriel River extends from Azusa to Seal Beach along the channel’s levee road and the adjacent frontage road.

10--Santa Ana River Trail. Managed by the Santa Ana Watershed Project Authority. This trail connects with 22 other regional trails. The total planned length of the trail is 100 miles. Of this, 73 miles are completed, including 30 in the San Bernardino National Forest, and 27 miles are in the design and/or construction phases.

11--Santa Clara River Trail (Parkway). Managed by the California Coastal Conservancy. Planning for the trail within the Parkway is in the preliminary stage. The trail has potential to encompass the entire 65-mile length of the Santa Clara River from the headwaters near Acton to the mouth at the McGrath State Beach. A major completed portion of the trail is a rail trail in the city of Santa Clarita, California. The State Coastal Conservancy is very active in funding the acquisition of parkway lands for this trail.

12--Trans-County Trail. Managed by the San Diego County Department of Parks and Recreation. The Trans-County Trail is a planned 110-mile east-west route in San Diego County that connects many cities and unincorporated communities. Nearly 70% of this route consists of existing trails that are currently used by the public. Acquisition and construction is still required for the remainder of the trail.

13--Whittier-Ortega Trail. No current manager. Also known as the Coal Canyon Trail or the Main Divide Trail, this multi-jurisdictional trail has no lead agency at this time. It begins in the Whittier Narrows Recreation Area, near the communities of South El Monte and Montebello in Los Angeles County. The connectivity after this point to Chino Hills State Park is poorly documented, going through regional parks, open space and private property. From Chino Hills State Park the trail passes through the Department of Fish and Game’s Coal Canyon Ecological Preserve and into the Cleveland National Forest.