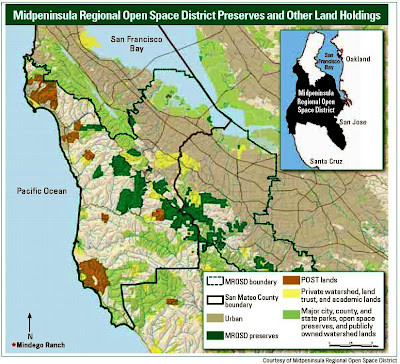 The Midpeninsula Regional Open Space District will enter a new era April 14, when Stephen Abbors takes over as its third general manager. Mr. Abbors, a trained biologist who has managed 28,000 acres of watershed lands for the East Bay Municipal Utility District, will increasingly focus on managing the nearly 56,000 acres the open space district already owns, as well as acquiring new land for open space....

Around 1970, a group of environmentalists centered in Palo Alto began looking for a way to avoid the constant battles over development: buy the land — or “fee simple,” as Wallace Stegner said. They planned a government agency, similar to the East Bay Regional Park District, that
could levy taxes, buy land, and manage it for open space and public recreation.
In 1972, voters in northern Santa Clara County formed what is now the Midpeninsula
Regional Open Space District. In 1976, voters in San Mateo County, from San Carlos south, voted to join the district....

Also in 1977, the district initiated the formation of POST, a private, nonprofit land trust that could raise private money, purchase and manage land, and operate with a lot more privacy and flexibility than a government agency....