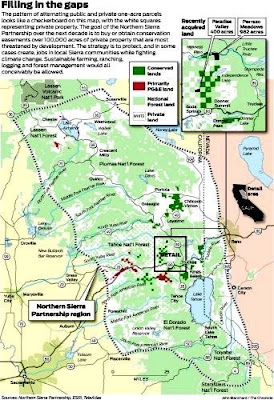 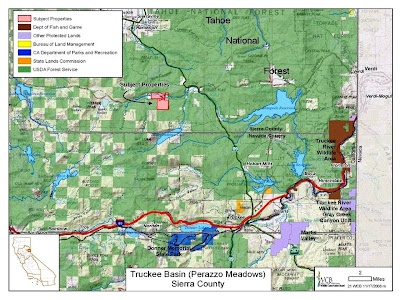 2/2/2009--The valley known as Perazzo Meadows is a stunning landscape of woods and watershed habitat surrounded by glimmering Sierra Nevada peaks, but there is more to the high-country Shangri-La than sheer beauty.

The 982-acre meadow northwest of Truckee is an integral piece of an unusual land grant made almost 150 years ago that left pristine forests, rivers and valuable wildlife habitat in the northern Sierra in a checkerboard pattern of alternating public and private ownership.

Bisected by a meandering section of the Little Truckee River, the remote, snow-covered meadow was in imminent danger of being sold to developers or parceled out for vacation homes until a conservation coalition purchased it and two other private properties from Siller Brothers Inc. for $6 million.

The Dec. 30 deal is the first major success of the Northern Sierra Partnership, formed in 2007 as part of an unprecedented campaign to take out of private hands 65,000 acres of land over the next three to five years through a combination of purchases, conservation easements and management agreements.

The $130 million effort is part of a broader plan, started in 1991 by the Trust for Public Land of San Francisco, to permanently protect as much as 200,000 acres of private checkerboard property in the region, which stretches from South Lake Tahoe to Lassen Volcanic National Park.

"Protecting these High Sierra meadows with creeks running through them are huge priorities," said David Sutton, the Northern California and Nevada director for the Trust for Public Land. "Perazzo has been a major priority for us since the mid-1990s. Buying it means 2 1/2 miles of the lower Truckee River are protected and the threat of land conversion is ended."

The Trust for Public Land formed the partnership with the Truckee Donner Land Trust, the Nature Conservancy, the Sierra Business Council and the Feather River Land Trust in an effort to save the Sierra's most unspoiled forest and wildlife habitat.

The alternating one-square-mile parcels known as the Sierra checkerboard cover a total of 1.5 million acres - an area roughly 80 miles long and 40 miles wide. On maps, it looks like a checkerboard.

The board-game pattern is the result of an 1862 scheme by the federal government to extend the Transcontinental Railroad over Donner Summit, the infamous site of the cannibalistic travails of the Donner Party 15 years earlier. The Central Pacific Railroad Co. was granted every other square mile of property along the mountainous route as an incentive to build the tracks.

The idea was to allow for enough room for the railroad to meander through the mountains. It also supplied the railroad with property in virtually every location where future towns might pop up, a strong inducement given the money-making possibilities.

Parcels not used were sold to timber and mining companies to help fund construction and, over time, it was all sold. About 40 percent of the railroad land was eventually acquired by Sierra Pacific Industries, a logging company based in Redding that is now the largest private land owner in California. Most of the public squares have since become National Forest lands.

Over the past two decades, the Trust for Public Land has negotiated the acquisition of about 25,000 acres of former railroad property. But Sierra Pacific and other lumber companies, along with ranchers and private investment management companies, still hold some of the most spectacular parcels....

The partnership plans to use foundation grants, state bond money, private donations and philanthropic contributions to protect 40 percent of the approximately 500,000 acres of private lands in the checkerboard, including important watersheds and wildlife corridors.

The idea is to create a conifer zone to the crest of the Sierra and protect watersheds on nine major forks of the American, Yuba, Bear and Little Truckee river systems...

A 400-acre parcel northwest of Castle Peak at the edge of the Paradise Valley was also acquired from Siller. A third property near Collins Lake, in Yuba County, was part of the deal, but it is not part of the checkerboard. It will eventually be transferred to the state Department of Fish and Game.

The Perazzo and Paradise properties will be turned over to the Tahoe National Forest. They are the ninth and 10th squares to be acquired near Castle Peak since the Trust for Public Land began buying property 18 years ago. Four other parcels are still under negotiation, but Perazzo is the most valuable, Sutton said, because it includes high-mountain meadow habitat, a river and wetlands....

View a 1924 map of the Sierra checkerboard lands at http://www.cprr.org/Museum/Maps/CP_Land_Map_1924.ht

The properties were purchased from Siller Brothers, Inc, a Marysville-based family company on Dec. 30. Money to finance the purchases came from a variety of state funds and private partners, TPL and TLDT announced. Two of the properties are near the proposed Castle Peak Wilderness Area north of Donner Summit, and the third is next to the Daugherty Hills Wildlife Area in the Collins Lake Recreation Area of Yuba County. The two mountain properties are also high priorities for the Northern Sierra Partnership, formed in 2007 by TPL, TDLT, the Feather River Land Trust, Sierra Business Council and The Nature Conservancy to insure the environmental and economic sustainability of the northern Sierra….