Some New Players in the Kern County Wind Farm Business 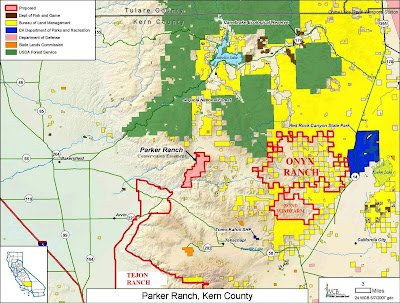 
In the far-south end of the Sierra Nevada Mountains lies the Onyx Ranch, a 68,000 acre parcel that has been eyed for preservation by the Audubon Society


"Oscar Rudnick, whose family had owned Onyx Ranch since early last century and who personally has a minority stake with the new owners, said the group will also consider leasing out water rights. Construction of housing isn't likely to be part of the plan, the new owners said."

Renewable stated that they intended to locate windmills at Onyx Ranch. Two seeks after the purchase was signed, however, Renewable Resources sold the lower half, or 30,000 acres to the City of Vernon, an all-industrial city in the L.A. basin which operates its own electrical utility.
Renewable is keeping the north half, which includes "along the south fork of the Kern River near Lake Isabella."

the staff report mentioning the sale is here:
http://kern.granicus.com/MediaPlayer.php?view_id=2&clip_id=748&meta_id=140214

L.A. City calls the former Enron project "Pine Canyon". It recently also made a deal with the Hansen Family Wilderness Farm for an 8000 acre windfarm called "Pine Tree" between the Enron land and Onyx Ranch.

the EIR's for the Pine Tree Wind farms project are here: