-
Yet Another Bankruptcy for Placer County's Bickford Ranch Project
November 2008 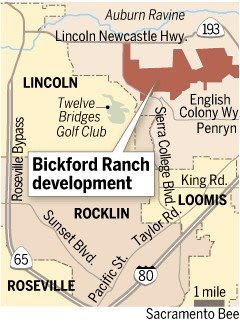 Sign of the Times
Reprinted below is a recent Sacramento Bee article regarding the latest tribulations of the infamous Bickford Ranch project, Placer County. Bickford’s financial troubles are currently shared by developers and developments statewide. The price of raw land is plummeting as developers dump their speculative holdings at fire sale prices to gain expiring tax write-offs. Many approved developments are seeking five to ten-year extensions for development agreements.

In 2002 and 2004 California Oak Foundation, Sierra Club and Audubon Society joined forces in bringing successful legal actions against Bickford, resulting in a $6.05 million mitigation payment to the California Wildlife Foundation (CWF) for the purchase of Placer County oak woodlands.

Bickford Ranch was a seminal battleground in the ongoing effort to achieve for Sierra Nevada oak woodlands the ecological deference this natural resource has always deserved. In retrospect, the go-go development period that Bickford spent engaged in legal proceedings turned out to be the difference between project success and failure:

The project, initiated by Miami-based Lennar Communities, won county approval in 2001. But it was stalled for years by lawsuits. Environmental groups argued that the location on pastureland and ridges violated the county general plan, which called for preserving oak woodlands.

In 2004, a Placer Superior Court judge agreed. Later that year, the developers resubmitted their plans. Then environmentalists sued again. Eventually, the SunCal partnership, which bought the property in 2005, paid $6 million to preserve oak woodlands elsewhere in Placer County to settle the lawsuit. Though developers initially expected the first residents would move in 2006, neither the golf course nor any homes have been built.

Note: To date, more than 2,000 acres have been saved by Placer Land Trust working with CWF, the United Auburn Indian Community, and Placer County.

SunCal attorneys said the project will go forward eventually. The Chapter 11 bankruptcy filing, they said, helps find a new investor. Bickford Ranch, however, was the development firm's fourth related bankruptcy filing in California. All involved partnerships with Lehman Brothers, which armed SunCal with $2.2 billion to develop properties throughout California and Nevada.
Posted by Rex Frankel at 5:23 PM