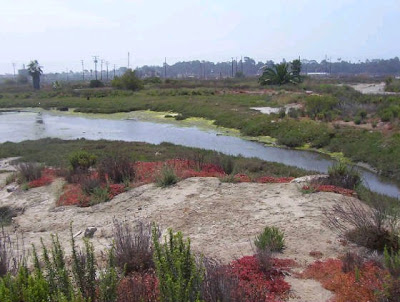 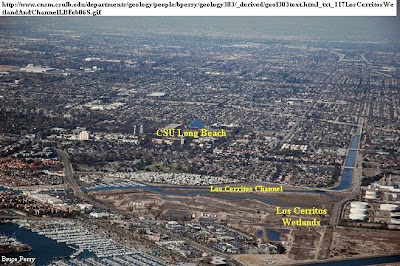 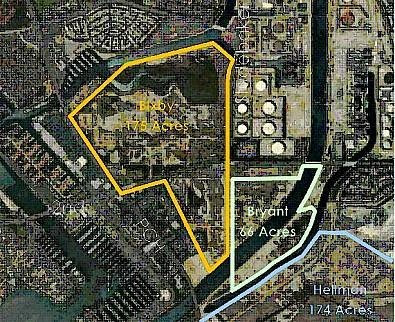 from Long Beach Press-Telegram--- In what appears to be a major victory for environmentalists, the city of Long Beach plans to acquire a large swath of the Los Cerritos Wetlands for restoration, city officials said Tuesday.

In exchange for the 175-acre wetlands property once owned by the Bixby Co. on the city's eastern border, the city would sell more than 50 acres of land in three primary, and some smaller, locations to a private developer, said 3rd District Councilman Gary DeLong, whose district includes the wetlands.

The city plans to acquire the degraded wetlands, which are bounded by Second Street and Pacific Coast Highway to Los Cerritos Channel and Studebaker Road, as well as a section south of Second Street behind the Long Beach Marketplace, where Studebaker dead-ends.

"Once completed, this will place the largest privately owned coastal marsh into the public trust," said Mayor Bob Foster in a prepared statement. "Los Cerritos is the final piece needed to complete more than a decade-long effort to restore Southern California's vanishing coastal wetlands."

The deal, if it goes through, would mean the end of a sports park project proposed on Spring Street between California and Orange avenues, but city officials said other recreation projects are planned for the central area and Westside...

TO SEE THE CITY'S PRESS RELEASE AND INFORMATION AND MAPS AND PHOTOS: 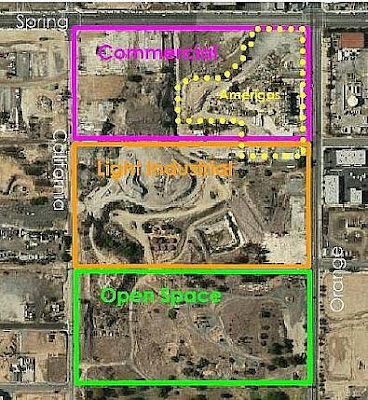 ABOVE: The site of the ex-sports park proposal that is being swapped by the city in exchange for the wetlands.

--In the swap, Mr. Dean would acquire the city's Public Service Yard on San Francisco St (next to the L.A. River) and LB's Gas & Oil HQ on Spring St @ Junipero St (next to the 405 freeway) plus two other "remnant" parcels. "The Spring St. frontage on the Hilltop Property could be developed for commercial purposes with the remainder developed for light industrial purposes. The Gas & Oil site could be developed for commercial and/or retail purposes," said a city management briefing paper given to reporters.

--Wetlands owner Dean would retain the oil and mineral rights to the wetlands conveyed to the City.

--City Hall would sell the wetlands property to the Los Cerritos Wetlands Authority for a sum currently estimated $25 million. LCWA Exec. Dir. Belinda Faustinos indicated at the event that she believes her group can come up with the money...but acknowledged there's no plan in place for that at present. [The four-person LCWA governing board currently includes LB Councilmembers Patrick O'Donnell and Gary DeLong].

--City management says it plans to use the money from sale of the wetlands sale to LCWA to support efforts to (1) acquire, restore and develop the 19-acre Wrigley Heights "oil operators" property as open space and (2) develop 18 acres of open space at what has been called the "Sports Park" site at Spring St/Orange Ave...that City Hall now calls the "Hilltop Property." City management says the Sports Park project (estimated cost: $50 million) is unfunded and no longer feasible. 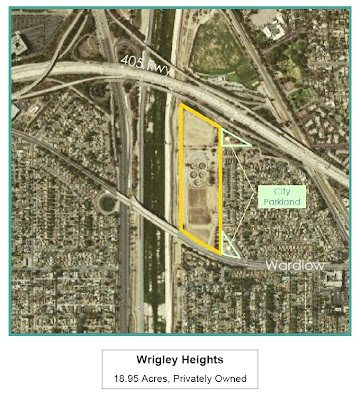 http://www.lcwlandtrust.org/ for the Land trust 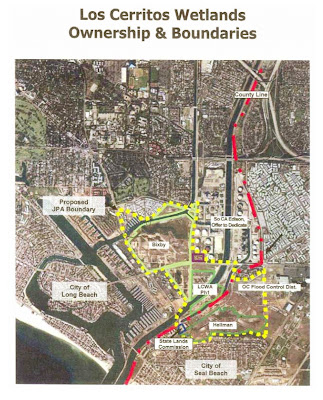 The Land saved in the latest deal is labeled "Bixby" and is between Pacific Coast Highway and Studebaker Road. A few other parcels near Los Cerritos wetland remain in private hands. The largest is the Hellman Ranch wetland, which is already off-limits to development as part of a deal allowing development of 70 homes in Seal Beach on the Ranch's east end. The LCWA is currently negotiating to buy Hellman.
Posted by Rex Frankel at 10:00 AM