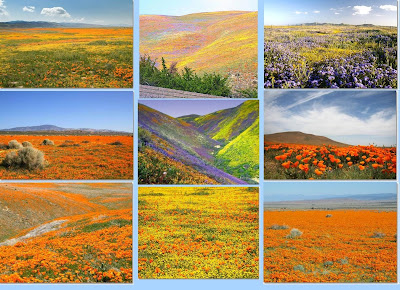 (Photos from http://www.desertusa.com/wildflo/ca.html#anchor007999, and photoshopped together thanks to Lucienne Levy)
-----
http://www.bakersfield.com/102/story/549916.html
9/11/2008
By JENNY SHEARER, Bakersfield Californian staff writer
A committee of biologists has reservations about a proposed Tejon Ranch Co. masterplanned community and advised Los Angeles County leaders not to approve it.
The Significant Ecological Area Technical Advisory Committee determined there weren’t enough wildlife corridors in the plan, said Shirley Imsand, senior biologist for the LA County Department of Regional Planning. The corridors appeared to dead-end at the edge of Centennial. Without sufficient territory in which to hunt and roam, species may decline.
“My feeling was that the committee felt there was potential for the development, but in its design, it wasn’t quite enough,” Imsand said Thursday.
The seven-member group cited the lack of a detailed management plan for the open spaces and natural areas in the project, she added.
Centennial would add 23,000 apartments, condos and single-family homes, public facilities and commercial options to land Tejon owns in northern Los Angeles County.
Barry Zoeller, Tejon Ranch’s vice president for corporate communications, said the company was disappointed by the committee’s decision but not surprised.
“SEATAC, to our knowledge, has never recommended a development project,” he said. “All the biological information becomes part of the environmental report, which is reviewed by the planning commission and the supervisors. We’re confident that they will believe, as we do, that Centennial is an environmentally sensitive community planned in the right way and in the right place.”
Land management plans will be explained in forthcoming reports, he noted.
In May, Tejon and environmental groups, including the Sierra Club, announced an agreement that would set aside up to 90 percent of ranch-owned lands for conservation.
In exchange, the participating groups agreed to not oppose Centennial and Tejon Mountain Village, a planned resort community in southern Kern.
A representative with the Center for Biological Diversity thinks the LA biological committee’s decision could make it problematic for Tejon to advance Centennial through the land-use approval process.
“It indicates that the Centennial project, one, is not compatible with the county (regulations) and two, it’s recognition that this is a huge impact to the natural resources of Los Angeles County,” said biologist Ileene Anderson.
The center was among the groups negotiating with Tejon but backed out over differences about agreement elements.
Centennial’s environmental impact report may not be available for public review until early or mid-2009, said Jeff Lemieux, a principal planner for LA County.
--------------------------------------

LOS ANGELES— An important Los Angeles County science advisory committee refused Monday to approve a proposed megadevelopment on the Tejon Ranch wilderness in the northern portion of the County. The 23,000-home Centennial development, which would include strip malls and other commercial parcels, would harm two Significant Ecological Areas designated by the County. The development also would displace the last herd of pronghorn antelope in Los Angeles County and destroy the beloved wildflower fields around the Gorman area.

“The Technical Advisory Committee members are safeguarding Los Angeles County’s world-class wild heritage,” said Ileene Anderson, a biologist with the Center for Biological Diversity, referring to the Significant Ecological Areas Technical Advisory Committee, or SEATAC. “They recognize the biological significance of the Tejon Ranch and could see no justification for why a new city should be built there. The last wild area of Los Angeles County needs to remain wild.”

The Centennial project, the largest housing development ever proposed in California, would be an enormous new city isolated from existing metropolitan centers, workplaces, and infrastructure. It would be an example of “leap-frog,” sprawl development that would require extensive commuting to jobs and services, which will increase traffic on the Interstate 5 corridor and further foul the air in an area that already is notorious for poor air quality.

In the 1970s, the County’s General Plan designated Significant Ecological Areas, or SEAs, based on the unique biological and ecological resources. Plans for proposed developments in these SEAs must undergo heightened review by SEATAC, a panel composed of scientists, in order to assure maintaining the integrity of the SEAs. Representatives of the Centennial made an unprecedented four visits to the SEATAC, and each time the developers failed to make adequate changes to the project that would retain the area’s ecological significance.

“It is no surprise that a proposal to bulldoze 8,300 acres of open space that cannot be replaced causes so much concern,” Anderson said. “Even in these tough economic times, Centennial developers were unwilling to compromise their development plans to protect the quality of life in Los Angeles County by conserving irreplaceable wildlife habitat.”

For more information on Centennial and other Tejon developments please go to http://www.savetejonranch.org/.

The Center for Biological Diversity is a national nonprofit conservation organization with more than 180,000 members and online activists dedicated to the protection of endangered species and wild places.