-----
City and State Wildlife Board to Preserve Lands at 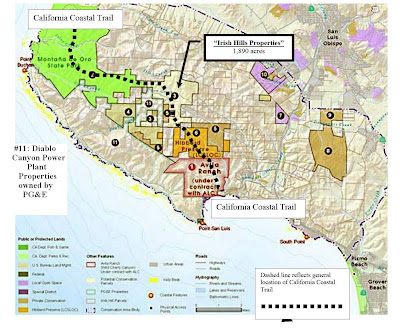 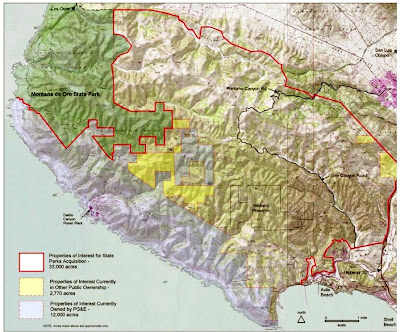 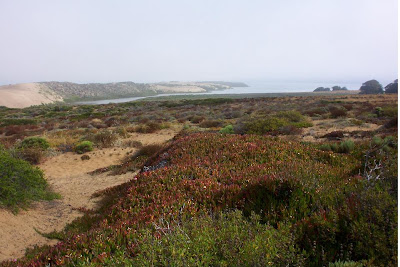 (A view of the Los Osos Dunes, which are on the north side of the Irish Hills)

To consider the allocation for a grant to The Nature Conservancy for a cooperative project with the Department of Parks and Recreation to acquire a conservation easement over 1,172+ acres to protect rangeland, grazing land, and grasslands located in the Irish Hills. Funding source: Proposition 84.

SUMMARY This staff report suggests your Board support the acquisition of the “Irish Hills Properties” (comprised of the Andre, Basseri, Wright, Muzio, Yost, and Miller properties) as additions to Montana de Oro State Park in San Luis Obispo County. No financial commitment from SLOCOG is involved in today action.

SLOCOG programmed $350K in support of the Avila Ranch acquisition in November 2007. The California Transportation Commission approved the allocation in the 2008 Regional Transportation Improvement Program. Avila Ranch consists of approximately 2,400 acres located southeast of the Irish Hills properties. The American Land Conservancy is working to acquire and extinguish the development rights the Avila Ranch, and possibly transfer the property interest to the state for use as a new State Park and recreation area. Together with the adjacent Hibberd Preserve, owned by the Land Conservancy of San Luis Obispo County, the conservation of Avila Ranch will create a 4,000-acre expanse for public recreation and resource protection. The acquisition of “Irish Hills” fills a critical gap that will connect Montana De Oro State Park with Avila Ranch – creating a potential 11.5 mile coastal trail segment through the Pecho Coast Irish Hills.

DISCUSSION Some reasons for SLOCOG to support the project include:

• it is large, especially considering the additional of the Hibberd Preserve which means a new 4000 acre state park, available for public use;
• there is a transportation/recreation nexus, and consistent with Smart Growth principals • it is mostly funded by state sources (~ $5 million);
• it has significant biological resources, including coast live oak woodlands, coastal terrace prairie, maritime chaparral, and riparian corridors of Wild Cherry Canyon;
• it is adjacent to ongoing Caltrans efforts/projects/new initiatives including: (a) San Luis Bay Drive bridge; (b) San Luis Lighthouse SLOCOG road project; and (c) soon to be constructed "climbing lane" on Highway 1 and 101 (ranch is visible from there) between the highway exits of San Luis Bay Drive and Spyglass;
• it offers huge coastal trails enhancement, perhaps a 20 mile loop extension of the California Coastal Trail.
• it offers great enhancement opportunity for the Bob Jones Trail. Bikers could start in San Luis, ride to Avila Beach, and then use existing Avila Beach road to the project, and possibly use future multiuse trails on the new state park property.

…The San Luis Obispo Council of Governments strongly supports the acquisition of the “Irish Hills Properties” (comprised of the Andre, Basseri, Wright, Muzio, Yost, and Miller properties) as additions to Montana de Oro State Park in San Luis Obispo County. As a transportation planning and programming agency representing the County of San Luis Obispo and all seven cities in the region, we see the enormous conservation, recreation and visitor serving benefits in these acquisitions. In fact, this particular acquisition fills a critical gap that will connect Montana De Oro State Park with Avila Ranch – creating a potential 11.5 mile coastal trail segment through the Pecho Coast Irish Hills. Our agency was one of the first funding partners to step forward with the American Land Conservancy (ALC) to secure the 2,400 acre Avila Ranch. The Irish Hills Properties acquisition supports the smart growth principles adopted by the San Luis Obispo Council of Governments in November 2007 to Preserve Open Space, Farmland, Natural Beauty and Critical Environmental Areas. The Irish Hills Properties, comprising about 1,890 acres, represent an important addition to the 8,400 acre Montana de Oro State Park. These properties, along with the anticipated acquisition of the Hibberd Preserve (1,500 acres) and Avila Ranch (2,400 acres) are critical linkages of the planned coastal trail connecting Montana de Oro to the town of Avila. We strongly support this acquisition and urge your Board’s approval. It will fulfill the vision of the voters to establish public access to, and public ownership of, important lands adjacent to one of the most beautiful state parks on the California coast. ------------------------

The San Luis Obispo City Council is expected Tuesday to approve adding more than 300 acres to the Irish Hills Nature Reserve — a move that would expand the popular hiking and open space area by nearly a third.

The addition is called the Froom Ranch back country and sits directly behind the shopping center on that contains Home Depot and Costco.

If approved, the purchase agreement will give the city two years to raise the money to close the deal.

The 310 acres would be added to the southern end of the existing open space reserve, which contains 702 acres with trailheads at , and .

It is a natural addition because the property has an existing network of dirt roads and four-wheel-drive vehicle trails that could easily be converted to hiking and mountain biking trails, said Neil Havlik, the city’s natural resources manager.

This addition has the same serpentine soil ecosystem and is home to many of the rare plants found in the existing open space.

The purchase also would help the city complete its restoration work in Froom Creek.

The property is now owned by Phyllis Madonna. It has been appraised at $780,000.

The Madonna family has agreed to donate $80,000 of

the price as a charitable gift.

The remaining $350,000 will be obtained through a combination of local fundraising and grants from the State Parks Department and Department of Fish and Game, Havlik said.

In the past, the city has successfully acquired grants from those two agencies to complete land acquisitions.

The purchase agreement is on the council’s consent agenda, a part of the meeting reserved for items that are not controversial and are approved simultaneously.

, —August 8, 2006—The Nature Conservancy has acquired another property in the heart of ’s Irish Hills, protecting 160 acres of wildlife habitat and scenic beauty. The Conservancy used private funding to purchase the property from Ron and Cheryl Yost for the appraised value of $175,000. Since the year 2000, the Conservancy has preserved approximately 2,700 acres in the Irish Hills. The Conservancy also played an assisting role in the original acquisitions dating back to 1965, which established Montana de Oro State Park.

"The Nature Conservancy is thrilled to bring more of the Irish Hills under protection," said Michael Bell, who directs the Conservancy’s efforts in . "This community cherishes the Irish Hills and we’re proud to be among the many dedicated groups working to preserve this beautiful and biologically-rich landscape. We’re also excited that this conservation work may one day help us to connect a coastal trail that crosses the amazing landscape of the Irish Hills."

The trademark emerald slopes and valleys that give the Irish Hills area its name are only one aspect of a diverse and rare natural system. This ecologically-demarcated region encompasses vast coastal bluffs, coastal scrub, coastal live oak woodlands, mixed evergreen forest, bishop pine forests, serpentine habitats and some of the only undisturbed coastal terrace prairie remaining in the state. The coastal creeks of the Irish Hills harbor native steelhead trout and red-legged frog and the lush woodlands that flank these waterways are rich in neo-tropical migratory birds.

The Yosts stated that they choose to sell their property to the Conservancy because of their deep love of the Irish Hills: "It was a pleasure dealing with The Nature Conservancy and we feel good knowing that our land will remain in its natural state. The preservation of this land will help keep the Irish Hills intact and beautiful."

Due to its proximity to Highway 1 and the city of , lands throughout the Irish Hills are threatened by residential development and habitat fragmentation. The Conservancy’s science-based planning process identified the Yost’s property as a conservation priority because of its high quality habitat and strategic location. The parcel features live oak woodlands and chaparral and lies adjacent to the 1,500-acre Hibberd Preserve, which the Conservancy acquired in 1998 and is now owned and managed by the Land Conservancy of San Luis Obispo.

Although The Nature Conservancy and its partners consider this project an important step towards the future establishment of a coastal trail through the Irish Hills, the Yost property is not currently open to the public, due to its remote location and lack of access.

The Nature Conservancy’s strategy in the Irish Hills and many other key areas around the world is two-fold: protect patches of land large enough to support truly functioning natural systems and genetic diversity and connect these core habitats through wildlife corridors, further bolstering the long-term survival of the ecosystem.

The Nature Conservancy has been working to protect the unique ecological riches of for more than 40 years, focusing primarily on the Irish Hills, the Carrizo Plain, the Guadalupe-Nipomo Dunes and the .