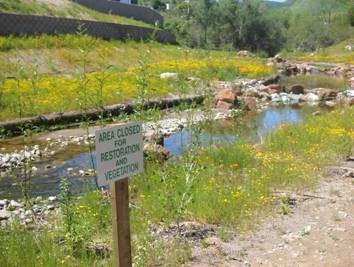 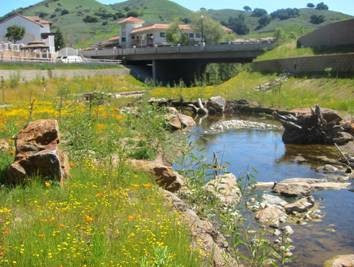 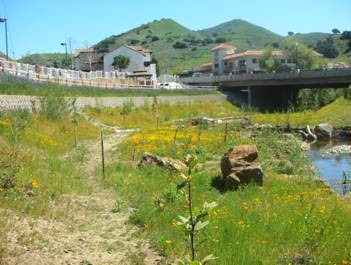 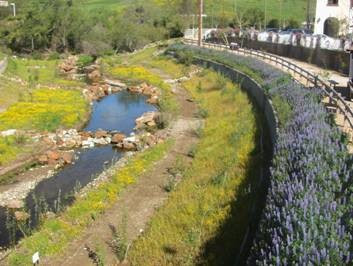 From the Sierra Club Santa Monica Mountains Task Force:
Lots of flowers have flourished at the Las Virgenes Creek restoration site and you can hear frogs signing in the creek. Here are some photos of the creek project site taken yesterday:

Here's one possible answer to stray steelhead being found recently in Ballona Creek in west L.A. Six months ago this section of Las Virgenes Creek just south of the 101 was a concrete channel comparable in size and depth to Ballona Creek. At a cost of a little over $1 million it has now been restored to a natural state, and is on the way to becoming a well-developed riparian forest similar to the one visible in the background of the first photo.
http://www.cityofcalabasas.com/environmental/Las_Virgenes_Creek_Restoration_Project.html
In 1977, approximately 400 feet of Las Virgenes Creek between Highway 101 and the Agoura Road Bridge was lined with concrete, severely disrupting the wildlife corridor and removing all viable riparian (green, vegetated areas on each side of streams and rivers) habitats from this once thriving natural creek segment.
The Las Virgenes Creek Restoration Project, when complete, will have a regional impact on policy for urban stream restoration in the Santa Monica Mountains. The Malibu Creek Watershed provides habitats for numerous species including steelhead trout, the southwestern pond turtle, Arroyo toad, Pacific tree frog, American goldfinches, song sparrows, coyotes, mountain lions. The City of Calabasas has sought funding from numerous State and Federal agencies to restore this segment of Las Virgenes Creek to its native condition and re-establish the ecosystem and tributary to the Malibu Creek and Lagoon.
Ground breaking for the Creek Restoration Project was held on Wednesday, July 18, 2007. The Grand Opening Ceremony is scheduled for Saturday, February 23, 2008 at 11:00 a.m.
Posted by Rex Frankel at 3:31 PM