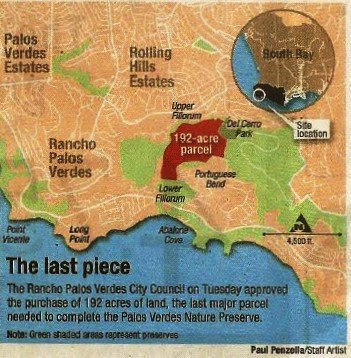 The Rancho Palos Verdes City Council on Tuesday unanimously approved the purchase of 192 acres of land in Portuguese Bend for $9.2 million.

Known locally as Upper Filiorium, the hilly swath of open space essentially completes the preserve the city and the nonprofit Palos Verdes Peninsula Land Conservancy have painstakingly assembled over the last few years.

"This is the linchpin; this is the last piece of property of any significance in Palos Verdes there is to get," said Henry Jurgens, president of

the conservancy's board. "It ties in all of the other properties we have purchased. So, consequently what we have here is now a corridor of 1,400 acres of contiguous land."

The acquisition, which is still pending, locks up hundreds of acres of pristine parkland overlooking the ocean - home to endangered habitat and several rare animal and plant species.

The entire preserve is considered the largest ecologically important tract of land between Huntington Beach and the Santa Monica Mountains.

Upper Filiorium was seen as a vital link in the preserve because it connects to other parcels to the east and west, providing a valuable route for wildlife and hikers alike.

While the city and conservancy, which manages the preserve, have an agreement in place to buy the land, neither yet has the cash to close the transaction.

"We are hopeful to secure some federal and state monies to assist with the purchase," City Attorney Carol Lynch said. "At least now we've got a purchase agreement."

City officials have long understood that federal and state financial support for the acquisition is highly likely and that remains the case.

For instance, $2 million in federal dollars were set aside four years ago for just this eventuality.

The seller of the land is a real estate investment trust that remains the largest landowner of open space on that side of The Hill.

While officials with the trust have long sought to make the sale of the land contingent upon developing 40 nearby acres into a luxury housing subdivision, city officials have long resisted that quid pro quo.

Councilman Doug Stern emphasized Wednesday that no deal was struck to ensure the sale occurred.

It's considered extremely unlikely the development will win approval, however, given its location near several unstable landslides.

The agreement actually addresses the potential donation of that 40-acre tract, although city officials stress it's more likely they will eventually be able to preserve that and an adjacent 54 acres.

"The city has been trying to preserve open space for a decade-plus," Stern said of the purchase. "It's something that will help us preserve the look and feel of our community. It's been sought after for so long." 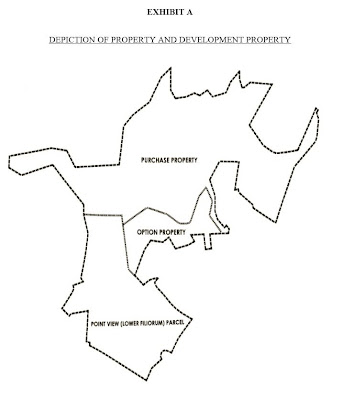 To read the staff report and the details of this purchase, see: