-----
A Look at Some of the Groups Working to Save the 20 Mile Wide By 100 Miles Long Blueridge-Berryessa Preserve Between the North San Francisco Bay Area and Sacramento
http://brbna.org 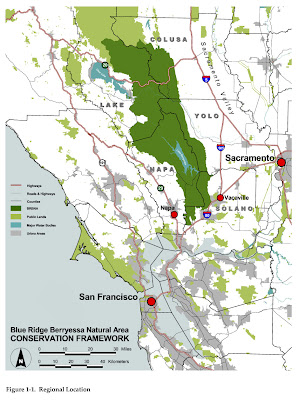 The Blue Ridge Berryessa Natural Area (BRBNA) focuses on Blue Ridge and the lands to the east and west of the ridge, down to the Capay Valley on the east side and over towards Coyote, Long, and Pope valleys on the west. It stretches from Monticello Dam in the south to the area north of Highway 20 between Williams and Clear Lake. Straddling the ancient contact between the rocks of the continental and Pacific tectonic plates, the area's diverse geology supports a unique assemblage of ecological communities including serpentine chaparral, grasslands, oak woodlands, and extensive riparian and cliff habitats.

Wildlife abounds. The area is sufficiently large and remote to support tule elk, bald and golden eagles, mountain lions and bears, as well as diverse songbirds, raptors, amphibians, reptiles and fish. The serpentine soils of the region host a large number of indigenous and rare plants, while Cache and Putah Creeks, along with their tributaries and the region's lakes, provide abundant fisheries.

The Napa County Lake District is part of the larger Blue Ridge Berryessa Natural Area (BRBNA), a natural area of some 750,000 acres spead over portions of five counties, half of which is public land. The BRBNA is the subject of a voluntary conservation partnership (the BRBNA CP) in which BT&C is a partner, dedicated to conserving the natural, recreational and agricultural lands within the BRBNA. Trails planned in the Lake District form the core of the regional trail system being planned in the BRBNA, starting with the Bureau of Reclamation's proposal for a 150 mile Lake Berryessa Shoreline Trail.

Most of the 80,000 acres of land in the Lake District is held by two federal bureaus of the Dept. of the Interior - the Bureau of Land Management (BLM) and the Bureau of Reclamation (BOR) plus a state agency, the California Dept. of Fish and Game (DFG). The fourth major public landholder is the UC Davis Nature Reserve System (NRS). Despite the extensive public land holdings, there are few formal trails in the Lake District, and finding access to the public land can be difficult.

1. Quail Ridge (NRS) - 2,000 acres, southeast of the Lake, scheduled hikes
2. Lake Berryessa Recreation Area (BOR) -19,000 acre lake plus 9,000 acres of land around the shoreline, Smittle Creek Trail and the North End Trail
3. Cedar Roughs (BLM) - 6,000 acres in the hills to the west of the Lake, no formal trails, proposed Wilderness area
4. Berryessa Peak Blue Ridge (BLM) - 9,000 acres (includes substantial portion in Yolo County) on Blue Ridge to the east of the Lake, surrounded by private land there is currently no public access
5. Knoxville Wildlife Area (DFG) - 20,000 acres, no formal trails but many old ranch roads. Includes the new 12,575 acres of public land acquired in December 2005
6. Blue Ridge (BLM) - 700 acres, while a small parcel in Napa County, this land is contiguous with the Cache Creek Natural Area which is 70,000 acres of land primarily in Lake and Yolo Counties. There is no trail in Napa County but there is an 8 mile trail north along Blue Ridge to the north of Napa
7. Knoxville Recreation Area (BLM) - 17,000 acres (includes substantial portion in Lake County) west of the Knoxville Wildlife Area, a portion of this large parcel includes OHV trails and a campground
8. McLaughlin (NRS) - 7,000 acres (includes substantial portion in Lake County), occasional guided hikes

Sacramento, Calif.—December 15, 2005—The Wildlife Conservation Board, in partnership with the Blue-Ridge Berryessa Natural Area Conservation Partnership, the Department of Fish and Game, the California Coastal Conservancy, The Land Trust of Napa County and The Nature Conservancy, today announced the acquisition and protection of the 12,575-acre Napa Ranch, an important milestone in protecting the region’s natural areas and providing wildlife-compatible recreational opportunities. The property, which will become part of the California Department of Fish and Game’s Knoxville Wildlife Area, includes one of the last unprotected segments of the 70,000-acre Eticuera Creek watershed, which supports a wide variety of threatened plants and animals.

“What the Point Reyes National Seashore is to San Francisco, or the Santa Monica Mountains National Recreation Area is to Los Angeles, the Blue-Ridge Berryessa Natural Area can be for our region,” said Ray Krauss of the Blue-Ridge Berryessa Natural Area Conservation Partnership, a coalition of private landowners and public land managers dedicated to conserving 750,000 acres in portions of Napa, Yolo, Solano, Colusa and Lake counties. “More than 10 million people live within a three hour drive of the BRBNA, and that population is expected to increase 33 percent by 2020. The protection of Napa Ranch is a big step in our effort to protect the region’s natural treasures and its way of life before it’s too late.”

The acquisition of Napa Ranch contributes 12,575 acres to the Knoxville Wildlife Area and a network of open space that spans the Cache Creek Wildlife Area, the Cache Creek Natural Area, the Knoxville Wildlife Area, the McLaughlin Reserve, the Cedar Roughs Wildlife Area and the Lake Berryessa public lands. Protection of the property preserves an important wildlife corridor serving a variety of wide-ranging animals, including mountain lion, bear and bald and golden eagle. Napa Ranch also contains one of the last unprotected segments of the Eticuera Creek watershed, which spans 70,000 acres of oak woodlands and serpentine chaparral — two highly threatened vegetation types in California of which only a small percentage remains. While only four percent of oak woodlands are protected in California, they are known to support more than 80 species of migratory and resident birds and more than 330 species of amphibians.