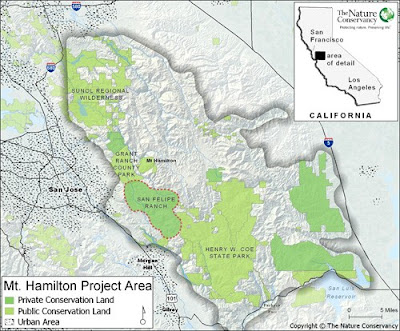 Protecting the Heart of Mount Hamilton
Fanning out from the southeastern border of urban San Jose, the Mount Hamilton landscape is a 700,000 acre stretch of open rangeland and wilderness where tule elk, bobcats, mountain lions and kit foxes roam.
At the heart of Mount Hamilton lies 28,359-acre San Felipe Ranch. Maintained as a working ranch for some 50 years, San Felipe is now protected by a Nature Conservancy easement. With its key location between two county parks and one state park, the ranch is the missing link in a corridor of protected lands that stretches 70 miles from Pacheco Pass to Livermore Valley.
A Slice of Old California
There was a time when California was known for its open ranges and rolling oak woodlands, not its high-cost housing market and sprawling suburbs interlaced with five-lane freeways.
Today, most signs of the "Old West" have disappeared. Farms and ranches have been replaced with subdivisions and housing developments. And unique habitats like oak woodlands — considered to have the richest species abundance of any habitat in the state — have been reduced to a fraction of their original range.
But not at San Felipe Ranch. An active cattle ranch maintained by its owners, the Hewlett and Packard families, San Felipe looks much like it did when it was first founded in the 1800s following the Los Huecos land grant. Badgers, burrowing owls and western pond turtles find residence in the ranch's open meadows, forests and streams. And rare native grasses, wildflower fields and oak woodlands flourish here. “Going out to the ranch is like stepping back in time," says Mary Jaffe, a member of the Hewlett family. “Our two extended families were highly motivated to protect this special California landscape from development."
Keeping Wilderness Connected
Since 1998, The Nature Conservancy has been working to keep the Mount Hamilton landscape safe from the chopping block. The area has come under increasing pressure for proposed light-rail lines, freeways, water projects and housing developments.
“Over the past 10 years, I’ve watched intense urban development push right up to the borders of the Mount Hamilton area,” says Mike Sweeney, executive director for The Nature Conservancy in California. “The past has given us a pretty good preview of what the future could be like without protection.”
San Felipe Ranch is located just four miles from the Highway 101 corridor, making it vulnerable for the rural housing developments that have cropped up nearby. Its location among Henry Coe, Joseph D. Grant and Anderson Lake Parks will preserve an important wildlife corridor and ensure that these parks don't turn into ecological islands, trapping species in a sea of concrete.
“As we look to the reality of looming threats such as climate change, corridors that allow plants and animals room to move and adapt will become increasingly vital to their survival,” says Rebecca Shaw, director of science for the Conservancy in California.
Cattle Ranches Support Mediterranean Habitat
San Felipe Ranch is nearly the same size as the city of San Francisco — and has its own international appeal. This active cattle ranch harbors one of the world's most diverse, most threatened and least protected habitats — the mediterranean habitat.
Covering just 2 percent of the planet, mediterranean habitat supports 20 percent of all known plant species. And, with just 4 percent of this habitat protected, it is even more threatened than tropical rainforests.
Much of California's mediterranean habitat is tucked away on ranches like San Felipe, in part because grazing is often compatible with the needs of the plants and animals that depend on mediterranean systems. Landscapes like Mount Hamilton were grazed for centuries by elk and pronghorn. Today, cattle help maintain the ecosystem much like the native ungulates once did, keeping invasive species from taking over and displacing native grasses.
“Cattle ranching can be a natural complement to conservation or it can be damaging,” says Shaw. “The management of the cattle operation on San Felipe is one of the former. The natural habitat and wildlife on San Felipe isn’t just surviving, it’s thriving."
Now, with a permanent conservation easement on the ranch, this slice of old California should continue to thrive long into the future.
Posted by Rex Frankel at 3:51 PM