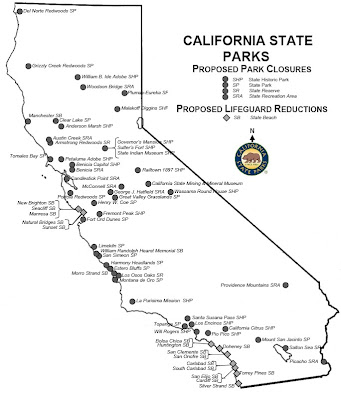 On Friday, as the news was sinking in, environmental groups vowed to mobilize tourism officials, school groups, historical preservation advocates and parks lovers to fight the plan in the state Legislature over the coming months.

"We're extraordinarily upset and frankly angry at this attack on California's treasured state park system," said Elizabeth Goldstein, president of the California State Parks Foundation, a nonprofit group in Marin County. "This is the most draconican set of cuts ever considered for California's state parks."

Meanwhile, parks experts predicted a patrolling nightmare if the Democratic-controlled Legislature agrees to the closures. It's not possible to "close" thousands of acres of forests, meadows and beaches, they said, even if you padlock the parking lot.

"What do they mean, close a park? Mostly you can't," said Joe Engbeck, a former state parks employee and author of "State Parks of California: From 1864 to the Present."

"You can take away the staff, but most parks have boundaries you can walk through anyway."

One of the most prominent parks on the proposed list, Henry Coe State Park near Morgan Hill, for example, is 90,000 acres -- three times the size of San Francisco.

On Thursday, Schwarzenegger proposed cutting $13.3 million from the state parks' $161 million general fund budget, along with a host of cuts to schools, prisons and social services, to close the huge $14 billion state deficit.

"I can see every single person hurt by these cuts," Schwarzenegger said. But "what we have to do is be fiscally responsible and to spend only the money that we have."

No governor since 1902, when the California state parks department was established, has ever closed state parks to balance a state budget, said Engbeck, a historian.

"It gives him a unique standing in history," he said.

State parks director Ruth Coleman, a Democrat first appointed by former Gov. Gray Davis, said her department chose which parks to close, based on attendance, revenue generated and geographic mix, after being told by Schwarzenegger's office to cut roughly 10 percent from the parks budget.

"We felt it was better to close a few parks so the others could remain open and safe and clean," she said.

Coleman said there are no plans to sell any state park land. Their gates would be locked in 2009, and they would reopen someday when the budget improves, she said.

"We're doing the best we can with the budget that we've been given," she said. "We will continue to patrol. We're going to be watching out for vandalism. We care about these parks deeply. These are tough times."

The plan would shutter nearly one in five of California 278 state parks -- from the towering trees of Del Norte Redwoods State Park near Oregon to the wide sandy beaches of Silver Strand State Beach in San Diego.

Yet those closures, along with the proposed elimination of the jobs of 136 rangers and other parks staff, would only eliminate one-tenth of one percent of the state deficit, critics noted.

Goldstein suggested a new tax on backpacks and recreational equipment or a small fee on auto registration to provide stable funds for rangers and wildlife protection.

The 48 parks on the closure list last year had a combined visitation of 6.5 million people. Closing parks can bring political risk.

Roger Kennedy was director of the National Park Service in 1995 when the Grand Canyon, Washington Monument and other parks were closed in a budget standoff.

"The public didn't believe it until we did it. And when we did it, they got plenty mad," he said. "The politicians misread it."

Among the biggest critics then: rural business leaders and politicians, many of them conservative Republicans, who said the parks were key to local economies.

Kennedy called Schwarzenegger's action "a high-risk" strategy, and predicted the public would demand some funding to keep them open, even a new surtax or fee increase.

In the Bay Area, a number of parks are on the list, including Henry Coe, Portola Redwoods in San Mateo County, Fremont Peak near Hollister, Candlestick Point in San Francisco, Tomales Bay State Park in Marin County, Limekiln and Fort Ord Dunes in Monterey and Benicia State Recreation Area in Solano County.

Carolyn Straub, a San Jose teacher who regularly hikes at Henry Coe, said she hopes legislators will block the closures.

"This park is very important," she said. "It takes us away from the bustle of San Jose. Its astounding how much land is out there. Parks exist for physical, mental and emotional health."

State Senate President Don Perata, D-Oakland, said Friday that he had not made a decision on the closures.

"While lamentable, park closures must be weighed against the many other immediate difficult choices we have," he said, "such as reducing funding for education, giving early releases to prison inmates and taking dental care away from the poor."