After more than 30 years of negotiations, the Backbone Trail that winds through the Santa Monica Mountains grew one step closer to completion Wednesday after one of the few remaining parcels of private land that dissect the trail was purchased.

"When you think about how long this trail has taken to be put together, it's an incredible effort," said Dash Stolarz, spokeswoman for the Mountains Recreation and Conservation Authority, which purchased the land.

The 10-acre property in Encinal Canyon was purchased for $275,000 and provides an easement to the Etz Meloy Motorway, which will be part of the trail.

Three other pieces of property are needed to complete the 20-mile trail in Ventura and Los Angeles counties. One is co-owned by Gov. Arnold Schwarzenegger.

More than 177 parcels have been obtained since trail building began in the 1970s. 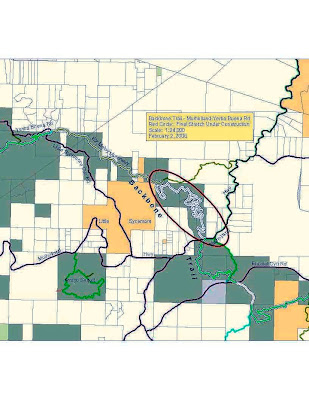 Four little parcels of land is all that stands between the National Park Service finishing its long anticipated Backbone Trail.

And one of those belongs to the governor.

Gov. Arnold Schwarzenegger co-owns one of the pieces of land in the Santa Monica Mountains that the Park Service wants to make part of the 60-mile trail that meanders through the mountains in Ventura and Los Angeles counties.

The Park Service and other agencies have worked for decades to cobble together public and private land to create a contiguous trail as a way to give citizens access to the mountains.

Joe Weider started an empire of fitness magazines and helped fund Schwarzenegger's rise from immigrant to superstar and then governor. Last month the governor held a special ceremony in Sacramento to declare July 9 as "Joe Weider Day."

Though Schwarzenegger seems open to negotiations to sell the property, "it's the other person" who is hesitant, said Melanie Beck, outdoor recreation planner for the park.

Documents show the governor and Weider have been in talks to sell the parcel to the government since at least 2000, but efforts were stalled in 2005 when the Park Service was denied permission to do a property assessment, according to Charles Taylor, spokesman for the Santa Monica Mountains National Recreation Area.

Schwarzenegger press secretary Aaron McLear said the governor is open to the idea of selling the property.

"He's OK with them coming onto the property to assess it and talking about selling it," McLear said. He was unsure if Schwarzenegger has tried to persuade Weider to sell the property.

Taylor said there has never been an agreed price on the 20-acres the Park Service would like to acquire. The Park Service usually pays about $2,000 for an acre of land and is bound to pay market value for it.

A "social trail" across the property that links the dissected Backbone Trail has existed for years, and the owners have never expressed a problem with people hiking through it, Taylor said.

Though the Park Service ultimately wants the land because there are no plans to develop the property and there is no money to buy it, there is no urgent hurry to acquire it, Taylor said.

"While this is at the top of the list, this is not our number one parcel," Taylor said. "The park is going to be here for a long time, so we are going to have to wait."

The Park Service would also like to acquire three private parcels of land along the Etz Meloy Motorway. It does not want to use eminent domain to acquire the land, Beck has said.

Park Superintendent Woody Smeck has said he'd like to one day designate the trail as a National Recreation Trail, giving it national prominence and the potential to receive additional funding.

In 2004, Schwarzenegger proclaimed an April weekend as "California Trail Days," in part because, "trails encourage healthy lifestyles, providing opportunities for Californians to step away from the pace of everyday life and witness first-hand the natural splendor of our Golden State."

In the coming months, the Park Service is planning to a celebration to commemorate a new 2.2-mile section of trail that is part of the last major section that needs to be built.

Backbone Trail near a milestone

Except for a few parcels, 30-year, 60-mile effort almost finished


At first, the only sound you can hear from high on a hill on the Backbone Trail is the chirping of birds flitting about the red shanks blanketing the landscape.

Then, the dull sound of a pick ax hitting the soil pierces the stillness. It's followed by a lumbering tractor groaning its way uphill and voices talking about moving rocks to help build a water crossing.

This is the sound of progress.

After more than three decades, the construction on the Backbone Trail that winds through the Santa Monica Mountains in Ventura and Los Angeles counties is nearly complete.

The last major section of trail, a 2.2-mile stretch off Mulholland Highway in western Los Angeles County, is expected to be finished by late summer. Crews have spent years building the trail designed for hikers, bikers and horseback riders.

"This is huge for us and the people who enjoy recreating in the mountains," said Woody Smeck, superintendent of the Santa Monica Mountains National Recreation Area. "It has been a labor of love for 30 years. It's 60 miles of trail that has been put together one parcel at a time."

But just because the construction is nearly complete doesn't mean the trail is whole. Four parcels of land along the trail, which make up about a 1.5-mile gap, are still private property. The Park Service doesn't expect to be able to acquire two of the parcels in the immediate future.

Three of the parcels are along the fire road, the Etz Meloy Motorway, and though hikers can access the land, the Park Service discourages that. Another piece of land to the east also is private property, and a "social trail" links two disconnected sections of trail.

Smeck said the Park Service has talked to most of the owners, and two seem willing to sell their land, but there is some indecision among two others.

The cost to buy the sections could be as much as $2 million, said Melanie Beck, outdoor recreation planner for the park. The Park Service is legally bound to pay fair market value for the property.

David Brown has seen the growth of the Backbone Trail over the years. He was around when it was first proposed in 1975 as a link between Topanga Canyon and Malibu. The idea grew to create a "backbone" of a trail, where others would branch out from it and all over the Santa Monica Mountains.

"It's been a long time coming," said Brown, who worked with the Santa Monica Mountains Trails Council to help develop the trail. "I was hoping we'd be at this point sooner, but I'm glad we are getting there."

Few people know the newest section of trail as intimately as Marcel Gillet. As he can tell you, building a trail isn't as easy as cutting down a few trees.

Gillet, a road and trails engineering technician at the park, and a few others, mapped out the new trail literally on their hands and knees. The chaparral was so thick it was the only way they could get through it. He wore "snake chaps" on his legs to protect him from rattlesnakes as he crawled along. Ticks just had to be pulled off at the end of the day.

Once the lay of the land was mapped out, natural and cultural resource officials had to make the crawl as well to make sure the trail didn't damage anything precious along the way.

Then there was the tree-cutting and grading and sloping. Each detail was thought out, every turn debated on how to make it accessible to everyone and last for generations.

"This is going to be an historic trail," he said.

Some turns in the trail took months to build, excavating dirt from one side of the trail to the other. Other sections have hand-built rock bridges spanning water crossings. One stretch took longer to build because it goes around a massive rock outcropping dubbed "lichen rock." It was just too pretty to disturb, Gillet said.

The new section is about 4 feet wide, which is plenty of room for two hikers or one horseback rider.

When Gillet looks at the trail now, still raw and barren from construction, he admires how gentle the grade is and how the construction techniques will keep it in good shape for years to come.

But in the coming months, after it's open, Gillet will walk the trail again, this time wearing civilian clothes. He hopes he'll see dads teaching their daughters how to mountain bike, young couples taking a stroll and whole families riding horses up his trail.

"You see people all the time having a great time and rediscovering themselves in nature," he said.

Then he'll know he did his job well.