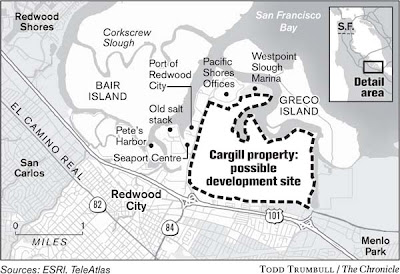 
The owner of one of the largest undeveloped swaths of bay shoreline says it is considering building houses on the land - a controversial idea opposed by environmentalists who say the property should be restored to its natural state and protected.
Cargill Inc. uses the 1,433-acre site on the edge of San Francisco Bay in Redwood City to produce commercial salt, but John Bruno, a spokesman for a joint venture between Cargill and a real estate development firm, told The Chronicle that the corporation is studying the possibility of building housing there.


The land is just southeast of Bair Island, a marshy, 2,600-acre restoration project that is part of the Don Edwards San Francisco Bay National Wildlife Refuge. On that former salt pond, where Redwood City voters in 1982 forbade development, harbor seals have found a place to sunbathe and rare species like the salt harvest mouse thrive.


Although Cargill has not actually produced any plans for the nearby 1,433-acre site, environmentalists say they would fight to prevent Cargill from getting permits to build residences there. Instead, they say the land should be used to further the state's goal of restoring the thousands of acres of bay wetlands destroyed over the past 200 years.
The idea of building housing on the land is supported by at least one local official, a key member of the Redwood City Planning Commission who says the city has an immense need for housing and amenities like playing fields and trails. And the executive director of the San Francisco Bay Conservation and Development Commission, which has jurisdiction over land within 100 feet of the bay's shoreline, said Cargill could pursue a development plan if it first restored at least half of the site to a natural setting.


Cargill is phasing out its salt production on the land and wants to convert it into some type of mixed development, including some housing. For the past year, Redwood City Industrial Saltworks - a joint venture between Cargill and a real estate development firm called DMB Associates - has solicited comments from Redwood City residents on what they want Cargill to do with the property.


More than 6,000 people have responded through mailings and comments during the company's forums, "and the vast majority of what we've heard is that people are looking for a mixture of uses, and that runs the gamut from housing to parks to bay trails," said Bruno, general manager of Redwood City Industrial Saltworks.


Bruno wouldn't specify the type of housing Cargill envisions nor what percentage of land the housing would occupy, but any development is opposed by groups such as Save the Bay. That group recently started a campaign to protect the last remaining undeveloped properties that ring the bay.


"It's not the place to put housing," said the group's executive director, David Lewis. "If Cargill thinks this can be approved, they're living in the past."


Cargill's Redwood City property is zoned "tidal plain," meaning the corporation would have to get an exemption from the Redwood City Planning Commission to pursue any development.
Before it does, Cargill would have to restore at least 50 percent of the area to natural habitat under state laws governing bay salt ponds, said Will Travis, head of the San Francisco Bay Conservation and Development Commission.


"Our position is that when you take a salt pond and use it for something other than salt making, a substantial portion of it should be restored to the bay or wetlands. The issue of what the (rest of the) property can be used for is the call of local government," Travis said.
And Lewis said the company would face additional development hurdles under the federal Clean Water Act, which he said prohibits former waterways from being filled with development if there are alternatives to put the development in another area. And, Lewis said, state water quality regulations would also severely limit what Cargill could build on the site, which has been used for salt production since 1901.