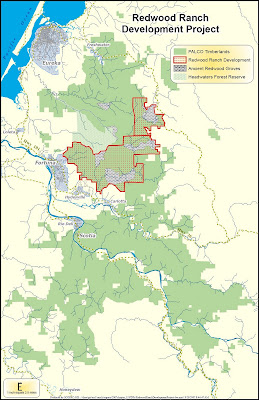 (click on map to enlarge)
(from the Bay Area Coalition for Headwaters Forest, http://headwaterspreserve.org/)

The long-awaited corporate reorganization plan that Pacific Lumber must, by law, submit to the bankruptcy court under Chapter 11 bankruptcy proceedings is out, after two extensions. Under bankruptcy law, the debtor (PL) gets the first whack at a proposed management plan, after which the court decides whether present management will retain control.
In brief, PL proposes to sell the Marbled Murrelet Conversation Areas, some 6,600 acres of ancient redwood forest contained in 6 groves that were set aside for 50 years under provisions of the 1999 Headwaters Deal. They propose to sell an additional 22,000 acres adjacent to and surrounding those groves as high-end housing development, sell the town of Scotia, and retain ownership of approximately 181,000 acres of forestland for timber production.
Our good friends at the Alliance for Sustainable Jobs and the Environment have posted the entire plan, along with a map at http://asje.org/PL_Reorganization_Plan.html
While PL CEO George O'Brien calls the plan "win-win" in the business pages, there are clearly losers, and at best, the proposal assumes an assembling of buyers for the land they wish to sell at unbelievably inflated prices. ($400 million for the ancient groves) Some manipulations are fairly bald-faced, as in Maxxam's "forgiving" of a $60 million "debt" that is an engineered claim against its own subsidiary in the first place, and PL financial architects clearly hope to woo the bondholders to their side of the court with their promises of cashing out the debt burden. The bondholders are owed about $785 million (from PL's refinancing of its original purchase debt) and would receive only (approx.) 67 cents on the dollar under that plan.
PL also claims as a chit in their favor the real estate expertise of its parent Maxxam. Hurwitz's Maxxam has been in the real estate business far longer than they have been in the timber business. High end development is their ball game and they play hard ball. An interesting story from Maxxam's past involves a development in the Palm Springs area proposed for bighorn sheep lambing ground.
PL is fighting to keep other proposals from coming before the court. A hearing to extend that exclusivity to February is scheduled for Nov. 23.
The SF Chronicle ran a story today about the PL plan and are offering a comment opportunity at http://www.sfgate.com/cgi-bin/article/comments/view?f=/c/a/2007/10/02/MN41SI0CB.DTL
You can link to the full story from there as well. Please weigh in, making the points that
*this is not a sustainable *reorganization*. It is proposed highway robbery with land values inflated in some cases 10 fold, and another attempt to raid private and public coffers and send hundreds of millions of dollars to the pockets of Charles Hurwitz.
*Old growth forests and BUFFERS are not negotiable. Isolated old growth groves need buffers to survive and thrive as habitat. Housing developments are NOT biological buffers.
*The bankruptcy court should receive alternative plans for management from creditors, Humboldt county residents, workers and other stakeholders.
*No conversion, ever, of forest land to development. It has happened to an extreme degree in Sonoma, to a large degree in Mendocino, and must not happen in the redwoods in Humboldt county!
NOTE: BACH will have a public activist get-together soon to present the situation in full, and also to bring updates from the oak grove tree-sit. Please watch for the notice!
Posted by Rex Frankel at 10:37 PM