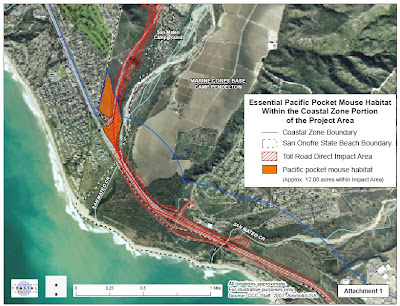 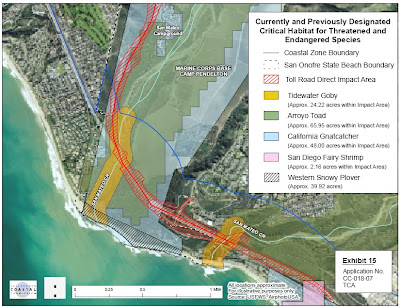 The Project is Scheduled to be decided upon at the Commission' s meeting on October 11th In San Pedro, at the Crowne Plaza Los Angeles Harbor Hotel, 601 S. Palos Verdes Street

Here is an excerpt from the summary:

Environmentally Sensitive Habitat Areas (ESHA):
The project is fundamentally inconsistent with the spirit and letter of numerous resource protection policies of the Coastal Act. The project involves development within environmentally sensitive habitat areas (ESHA) and is inconsistent with the ESHA policy (Section 30240), which only allows “uses dependent on the resource” within an ESHA. Moreover, the project is inconsistent with the additional requirements of Section 30240 because it would not protect the ESHAs against any significant disruption of habitat values; not be sited and designed to prevent impacts which would significantly degrade those areas; and not be compatible with the continuance of the ESHAs. The ESHAs include habitat for the Pacific pocket mouse, tidewater goby, arroyo toad, coastal California gnatcatcher, least Bell’s vireo, and southern California coast steelhead. The most significant adverse impacts, impacts which cannot be mitigated, would be to the Pacific pocket mouse. In fact, it is highly likely that the project would result in the complete loss of one of the three remaining limited populations of Pacific pocket mouse and thereby hasten the extinction of the entire species, which is federally listed as endangered. The project would also likely result in the loss of the only remaining coastal population of the arroyo toad, also federally listed as endangered, because it proposes at least three years of significant construction activities within more than 66 acres of ESHA for this species. The project also proposes to conduct grading, vegetation removal, and substantial landform alteration associated with the placement of the six lane toll road within 50 acres of the vitally important coastal sage scrub vegetation community that provides federally designated critical habitat for the coastal California gnatcatcher, a third species listed under the federal Endangered Species Act. Moreover, the project proposes permanent and prolonged use of wetland areas totaling over 29 acres, areas that have included federally designated critical habitat for two species that are federally listed as endangered, the tidewater goby and arroyo toad, and provide essential ESHA habitat for two others also provided with this listing status, the least Bell’s vireo and southern California coast steelhead.

In addition to the disturbance and destruction of untold numbers of these six species and potentially irreparable harm to their local, regional and global populations, populations which have been consistently recognized as both vitally important and gravely threatened, the project would fragment and transform one of the last remaining intact watersheds and coastal canyon ecosystems in all of southern California. Considering the magnitude, extent and duration of activities associated with the project it is highly likely that well over 66 acres of ESHAs would be degraded or permanently lost. As evidenced by the large number of threatened or endangered species and federally designated critical habitats within the relatively small portion of the project area that is proposed to occupy the coastal zone, and the fact that nearly 48% of the 138 acre project footprint within the coastal zone has been found to meet the Coastal Act definition of ESHA, it would be difficult to imagine a more environmentally damaging alternative location for the proposed toll road and one which would be more clearly inconsistent with the environmentally sensitive habitat resource protection requirements contained within Coastal Act Section 30240.
Posted by Rex Frankel at 11:42 AM