L.A. Councilman urges opposition to 5,500-home development at Wildlife Pinchpoint between and 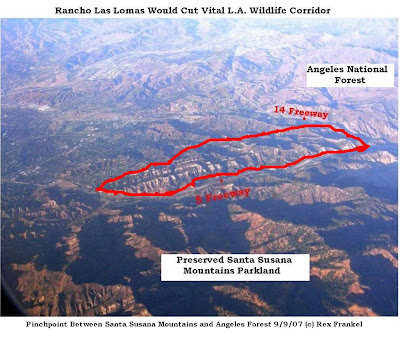 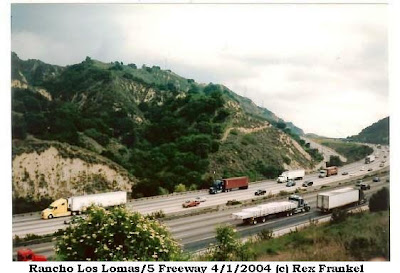 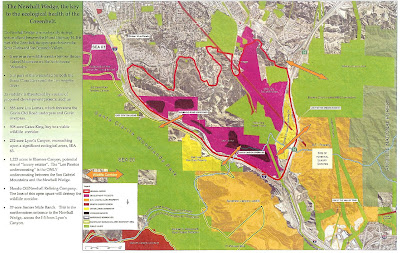 San Fernando Valley neighborhood councils are getting dueling letters over the proposed Las Lomas mini-city - even before the 5,500-home development in the Newhall Pass has been considered by city leaders.

Hoping to block the project, Councilman Greig Smith sent a letter to Valley neighborhood councils this week calling the project a "tsunami of sprawl" and asking them to officially oppose it at their next meeting.

"It is too big, too dense, and in the wrong location," he wrote. "The impacts of the proposed Las Lomas development are simply impossible to ignore."

In response, Las Lomas Land Co. President Dan S. Palmer Jr. is sending a letter to neighborhood council presidents asking them to hold off any decision until they have heard his side of the story and the project is fully studied.

"We are aware that your Neighborhood Council has received a lengthy `white paper' and a letter from Los Angeles City Councilman Greig Smith which describes a mythical project that has little resemblance to the real Las Lomas plan, and yet urges your Neighborhood Council's immediate opposition to his imaginary project - before you have even had an opportunity to independently study the real Las Lomas," Palmer wrote.

"The City Charter empowers you to advise the City Council - not the other way around."

Palmer goes on to say that he intends to formally present the Las Lomas plans to neighborhood councils within two months.

Proposed more than five years ago and then stalled amid political opposition, Las Lomas is again a hot issue in City Hall. The site is just outside the city boundaries in county jurisdiction, where zoning limits the project to 200 homes. But Palmer wants to annex into L.A. to have access to the city's water supply and to allow a denser project.

Originally envisioned as a Mediterranean-style hilltop community of 5,800 homes and businesses, in the past two years Palmer's team has recast the plan as an energy-efficient, environmentally stable, mixed-income community with up to 5,500 town homes and condominiums, a hotel, a school and a commercial center.

This year, Palmer offered to pay the city for the staff time needed to process his development application. The City Council is now considering that request.

Smith and others have argued that the city does not have to process Palmer's development application.

But Councilman Richard Alarc n, whose district would likely include Las Lomas if it joined the city, said Smith's effort to kill the project in L.A. could end up hurting the city.

"The developer could go to the county or Santa Clarita and work out a project that could be detrimental to Los Angeles," he said.

While Alarc n said he doesn't support the project in its current form, he has urged the City Council to accept Palmer's offer to have a fee-for-staff-time agreement so L.A. will have more control over the project and recoup the costs.

The council's Budget and Finance Committee will consider the fee agreement.

In the city of , it's often the neighborhood councils that complain that they are the last to know about big real estate development projects in their backyards.

That notion was turned around this week when Councilman Greig Smith sent letters to neighborhood councils across the San Fernando Valley urging them to oppose the massive Las Lomas project that is proposed near the junction of the 5 Freeway and 14.

"This development would have a profoundly negative impact on the entire ," Smith wrote in the letter. "Simply put, this development is a tsunami of sprawl. It is too big, too dense and in the wrong location. The impacts of the proposed Las Lomas development are simply impossible to mitigate."

The project calls for 5,500 housing units on mountainous terrain north of the city limits. The developers are hopeful city officials will annex the land, which would allow the project to tie into the city's water supply.

Las Lomas is being pushed by developer Dan Palmer, who has hired six lobbying firms to help him get the necessary approvals. The project has been discussed for the past several years but has recently been revived.

Councilman Richard Alarcon earlier this year introduced legislation that would allow the city to process the development's application if Las Lomas pays for it. The fate of the motion is still to be decided. "I don't think anyone can support the project in its current iteration," Alarcon said. "Councilman Smith is certainly entitled to express his opinion of the project, but my fear is that if Los Angeles does not seize control of this project, the city of Santa Clarita will, and that could lead to negative consequences for" Los Angeles.

Santa Clarita officials, however, have said that the plan is far too dense and have shown little interest in supporting it. Alarcon did not rule out supporting the project in some form, but he said it would have to greatly expand wilderness protection.

Smith has maintained that the city should not process the application because the project is widely opposed and lies outside .

Matt Klink, a lobbyist with Cerrell Associates and a spokesman for Las Lomas, declined to comment, saying he had not seen Smith's letter.